Ninth place at Fontana was enough for Will Power to finally secure the IndyCar championship crown on Saturday night, while Tony Kanaan claimed his first win since joining Ganassi.

Power started from second-last on the grid, and spent the opening two thirds of the race patiently picking his way through the field.

By the time the first and only caution came out on lap 176, he was up to sixth. A couple of laps after the restart he was leading, courtesy of a series of nail-biting moves to the low side of the track; an area that virtually no driver had used successfully all weekend.

Indeed, rival Helio Castroneves' efforts to reel his Penske team-mate back in by taking the same line were rebuffed each time; the Brazilian repeatedly diving low only to immediately drift back up the track.

Power's hopes of winning the race faded over the last couple of stints as he began to struggle with his car's handling, but an uncharacteristic error from Castroneves meant that the Australian could afford to sacrifice a few positions.

Castroneves was preparing to enter the pits for the final time when he drifted back over the line that marked the boundary to the track, earning himself a drive-through penalty for an illegal pit entry.

"That was one of the hardest races ever," said Power. "Oh my God, I was crying over the [finish] line. It went on and on, and I slowly made up positions... This is surreal, man. I can't believe it. I am so mentally exhausted now. That was mega."

Castroneves, who had run at the front for most of the evening up to that point, crossed the line 14th.

"I was pushing extremely hard," he said. "I knew that the only way for us to get in front was through the pits, and I got them all right except the last one. My bad. It was a great season for Team Penske, and ... another second [in the championship].

Kanaan's win ahead of team-mate Scott Dixon gave Ganassi a 1-2 to finish what had started out as a frustrating season, and one plagued with near-misses for the 2013 Indianapolis 500 winner. 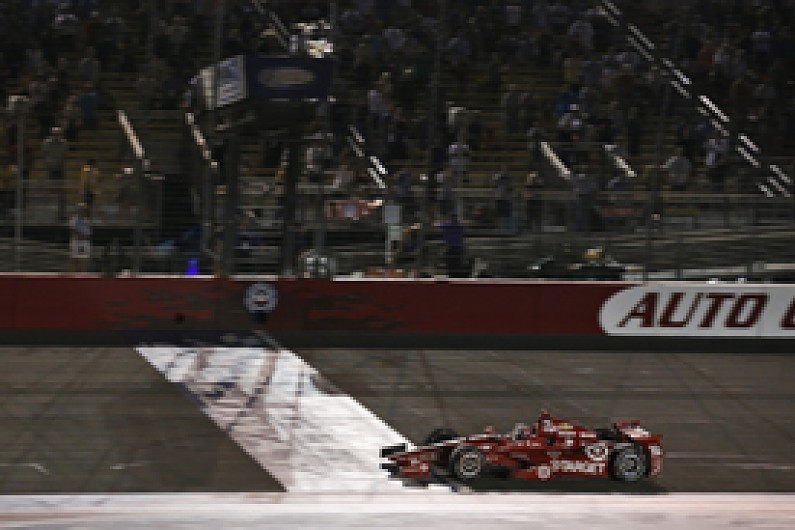 His race was essentially a continuation of his strong late-season form: he was competitive throughout, and in the final combative stints, he could afford to take more risks than the Penske cars around him.

Ed Carpenter rounded out the podium; the owner-driver believing that he could have created more problems for the Ganassi pair had he not been delayed by lapped traffic in the final stint

Juan Pablo Montoya dominated the early part of the race and led most laps before drifting back to fourth in the later stints, while James Hinchcliffe recovered from a drive-through for pitlane speeding to complete the top five.

Simon Pagenaud, who was the only other driver who came into the race with a mathematical chance at the title, had a nightmarish 500 miles.

The Frenchman made an unscheduled stop two-thirds of the way into his first stint in an effort to cure chronic handling problems, and he ended the evening seven laps down in 20th.

It was almost as tough for Ryan Hunter-Reay, who ran strongly early on before his charge was derailed by a huge spin out of Turn 4 - which prompted the caution - and a later penalty for pitlane speeding.