© 2020 Autosport.  All rights reserved.
Previous / Acura intends to continue in IMSA with LMDh rules
Next / IMSA, IndyCar to race at Detroit on separate weekends

The Penske team delivered a succession of pitstops which allowed Castroneves and Taylor to climb back up the field and atone for a problematic opening of the race.

Polesitter Dane Cameron, in the sister #6 Acura, retained his advantage at the start while Castroneves was jumped by Action Express Racing's Cadillac piloted by Pipo Derani and Mazda's Jonathan Bomarito.

Cameron had pulled a five second advantage over Derani by lap 20, while Bomarito was occasionally under pressure from Castroneves - but always seemed to have the pace to ease away.

Juan Pablo Montoya took over the #6 Acura from Cameron in the first round of stops, while Derani stayed aboard the #31 Cadillac.

Penske then got Castroneves out ahead of Bomarito, who left the pits with equipment still attached to claim a drive-through penalty, to claim third and proceeded to challenge Derani ahead along with Wayne Taylor Racing's Ryan Briscoe.

Just past the one-hour mark, Montoya understeered off the track exiting Turn 5 while on the outside of a GTD car and bumped over the grass, rejoining third behind the Derani and Castroneves battle.

Derani then pitted 20 minutes later on his 62nd lap to hand over to Felipe Nasr, but Castroneves went two laps longer before pitting and relinquishing to Ricky Taylor. His extra lap effectively gave the #7 Acura the lead, although Montoya's post-excursion pitstop had allowed him out front.

The race was briefly neutralised by a full-course caution for a GTD clash between Andy Lally and Rob Ferriol, but soon after the restart, Montoya allowed Taylor through into the lead.

With 45mins to go, the Prototypes made their final pitstops for fuel, but Montoya took tyres in addition to emerge in fifth.

Tristan Vautier's JDC-Miller Cadillac lost power exiting Turn 1 with 38 minutes to go, bringing out the third caution of the day, and the next restart resulted in Taylor trying to hold off Nasr, Briscoe's team-mate Renger van der Zande, Harry Tincknell in the #55 Mazda, Montoya (on fresh tires) and #5 JDC Cadillac driver Joao Barbosa. 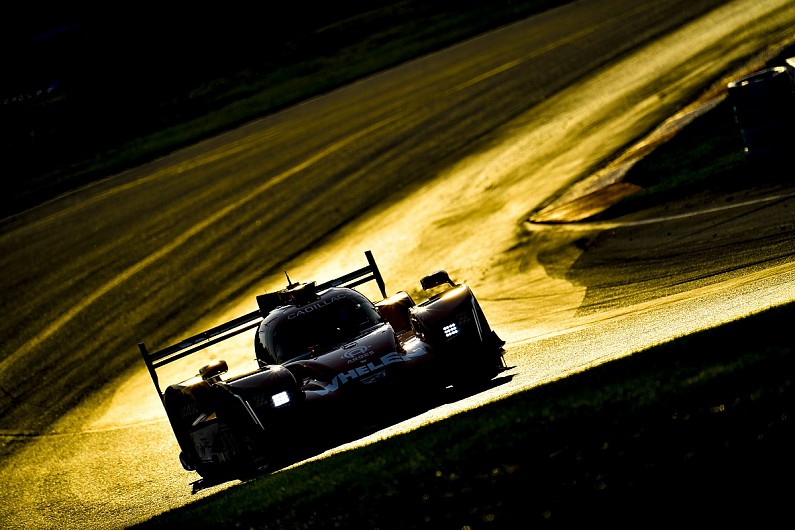 Nasr did not let Taylor escape, but the gap opened up as the pair hit traffic to give Taylor a little respite, crossing the line to win just half a second clear.

Barbosa was sixth, while Montoya dropped to the back of the DPi class with 10 minutes remaining having lost control at Turn 1 - subsequently taking another precautionary pitstop.

Antonio Garcia and Jordan Taylor claimed a fourth victory of the season for the #3 Corvette Racing team in the GT Le Mans class, despite the polesitting entry losing out to stablemate Oliver Gavin in the #4 car at the start.

Garcia's team-mate Taylor kept the pressure on Gavin, and after the British driver braked too late at Turn 4 on the 18th lap, Taylor stole past to reclaim the lead.

Garcia took over from Taylor amid the second caution to retain the #3 car's lead ahead of Tommy Milner, while Connor De Phillippi's #25 BMW M8 this time emerged ahead of John Edwards' #24 machine for third in the absence of the Porsche team due to COVID-19 concerns.

Aaron Telitz and Jack Hawksworth converted the GT Daytona pole into victory, enjoying a thrilling scrap with the Meyer Shank Acura of Matt McMurry and Mario Farnbacher in the middle part of the race.

Although McMurry took the class lead after the first restart, he later handed over to Farnbacher whose collision with the Compass Racing McLaren of Paul Holton cut the Acura's front-right tyre.

Hawksworth stayed in front of an entertaining scrap between Lawson Aschenbach's Mercedes and Patrick Long's Porsche for second, but the Riley Mercedes driver held firm, and was actually within one second of the victorious Lexus at the flag.

Farnbacher managed to control the damage after his skirmish with Holton, with teammate Alvaro Parente in the #57 MSR machine letting him through to clinch fifth at the checkered flag, behind Roman de Angelis in the Aston Martin.

Share this article on Facebook Twitter LinkedIn Email
Previous / Acura intends to continue in IMSA with LMDh rules
Next / IMSA, IndyCar to race at Detroit on separate weekends
© 2020 Autosport