Koudai Tsukakoshi had led by the best part of 10 seconds in the polesitting Real Racing Honda ahead of the Kondo Nissan of Jann Mardenborough in the dry early stages.

But Real Racing elected to fit slick tyres during the mandatory pitstop, leaving Tsukakoshi's team-mate Bertrand Baguette vulnerable as the rain that had hit the race intensified.

Unsurprisingly, Baguette fell down the order when the race resumed after the first safety car period, with Nakayama in the SARD Lexus sprinting into the lead on wet tyres.

Baguette returned to the pits for a second stop, bolting on a set of wets as another safety car was deployed for two GT300 cars getting beached in gravel.

After the race resumed on lap 50 of 65, Nakayama immediately pulled clear in the SARD Lexus, establishing a comfortable buffer out front.

Baguette rapidly closed in on Nakayama late in the race, but couldn't catch the 28-year-old, who held on to score SARD's first victory since last year's Thailand round. 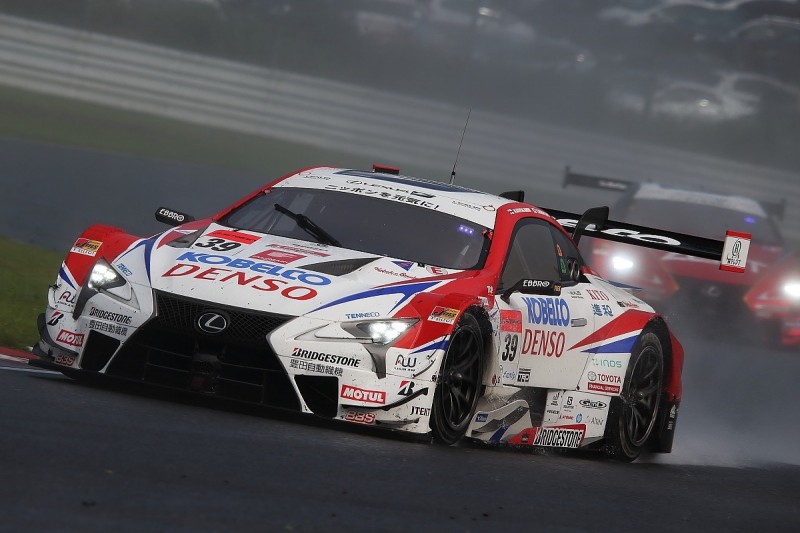 Ryo Hirakawa rose up from eighth to third in the latter stage to secure a third podium finish for the #37 TOM'S Lexus he shares with Nick Cassidy.

The result helps Hirakawa and Cassidy reduce the deficit to the championship-leading LeMans Lexus of Kazuya Oshima and Kenta Yamashita, which was a distant sixth.

Yuji Tachikawa and Hiroaki Ishiura finished fourth in the Cerumo Lexus, ahead of the ARTA Honda of Tomoki Nojiri and Takuya Izawa.

Nissan was caught out by the timing of the safety car, none of its three leading cars having made pitstops by then.

The NISMO, Kondo and B-Max GT-Rs all pitted immediately after the first safety car period but were forced to stop again for wet tyres later in the race.

Jann Mardenborough and Mitsunori Takaboshi finished as the lead Nissan runners in ninth, having run a comfortable second in the early part of the race.

Naoki Yamamoto and Jenson Button's hopes of retaining their crown took a big blow when Yamamoto crashed the Kunimitsu Honda heavily into the barriers on lap three. The cause of the incident remains unknown at present.

The DNF leaves the Kunimitsu duo 36 points off championship leaders Yamashita and Oshima, with 42 on offer in the final two races of the season.

The Goh McLaren squad had looked set for its first class victory after Alex Palou passed the #88 JLOC Lamborghini of Takashi Kogure late in the race.

But equipped with slick tyres on a drying track, Yoshimoto stole the lead from Palou with just three laps to go.

Palou and his team-mate Seiji Ara held onto second in the #720 McLaren 720S, ahead of the Lamborghini of Kogure and Yuyu Motojima.