W Series Zolder winner Beitske Visser said her 'perfect' start was key to her dominant victory over Jamie Chadwick, despite detaching her steering wheel just moments before the race

Visser lined up on the grid in second position, after narrowly missing out on pole to Hockenheim winner Chadwick, and made a rapid start to take the lead into the first corner on the first lap.

But Visser revealed that moments before the start, she had removed her steering wheel because the display on it had been flickering on and off.

Hitech GP - which runs the cars for the whole W Series field - confirmed that the problem was strictly visual and that the overall racing performance was unaffected.

"I was actually worried about my own issue: my steering wheel went black on the formation lap and I couldn't see anything," said Visser.

"I tried to reset the steering wheel, so I parked in P2 and then was like 'OK, what can I do?'

"I took the steering wheel off and put it back on - which was maybe not the smartest thing to do in this situation, but it was the only thing I thought about.

"It didn't really solve the issue so I drove the whole race without a dash.

"I could still see my shift lights so I was counting the gears and it was fine.

"[In] the race, you know that at Turn 1 you have one downshift and that kind of thing so it doesn't make things too hard and other than that everything was perfect.

"It doesn't bother you that much, obviously I couldn't see engine temperatures but I knew the gears and I know when to downshift." 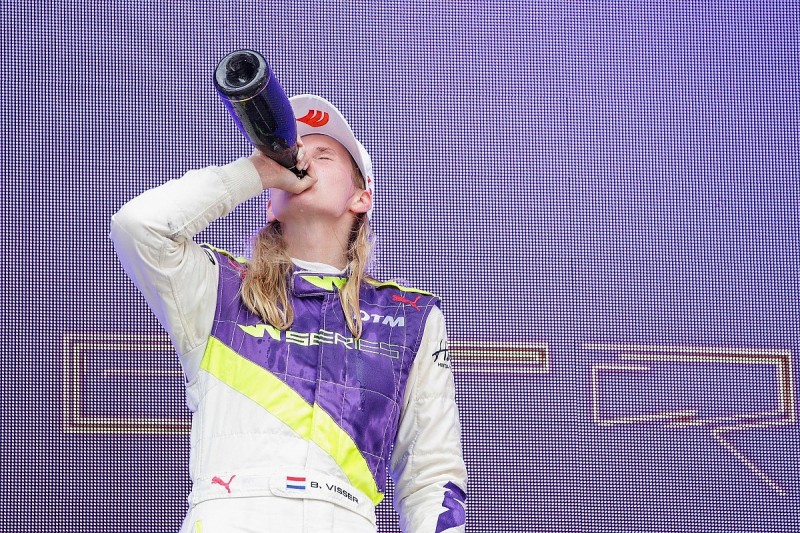 Visser's lead was immediately interrupted by a safety car to recover the car of Sarah Bovy from the grid.

She successfully held the lead at the restart, before another safety car was called as a result of an incident between Esmee Hawkey and Gosia Rdest.

Visser again managed the restart well to maintain the lead and begin to build a comprehensive margin of almost eight seconds over Chadwick.

"I knew that this was a hard track to overtake on, so I knew I had to nail the start and I somehow felt confident that I could do it," said Visser.

"I launched off perfectly and barely had any wheelspin, and then was in front at Turn 1.

"The two safety car restarts made things tricky, but I think I did them perfectly.

"After that it was just slowly building a gap until those two [Chadwick and Alice Powell, who enjoyed a late battle for second position] started fighting and then they made it easier for me.

"I watched the start back actually and my line was quicker, I think I just reacted quicker and had a really good first lunge and barely any wheelspin.

The secrets of oval racing