Promoted: Inside karting with Cian Shields

We joined Scottish karting ace Cian Shields to discover what goes on at a kart meeting, and how to get started in the sport

Years before many racers even sit in a 'proper' racing car, chances are they will have honed their craft at one of the many karting circuits found around the UK. One of the most popular championships for drivers looking to gain experience is IAME Cadets.

Powered by a 60cc IAME engine, the series for eight to 13-year-olds is a proving ground for up-and-coming talent. At the Three Sisters circuit, just a couple of miles outside the centre of Wigan, more than 40 youngsters competed in the season finale of the Northern Karting Federation's IAME Cadet championship.

One of those was 12-year-old Cian Shields. Shields has been karting for 18 months and is coming to the end of his first full season in IAME Cadets. He has taken part in championships stretching from his local Larkhall circuit to PF International - the host of this year's CIK-FIA World Karting Championship.

Racing as a privateer, his career has seen him go from his first taste of karting on his 10th birthday to winning races against some fierce competition. Competing at Three Sisters for just the second time, he worked closely with driver coach - and karting ace - Dean Macdonald to fine-tune his knowledge of the high-speed circuit.

Macdonald, who competed in British GT this year with McLaren GT, is full of praise for Cian's development: "Since I started working with Cian his racecraft has really improved. He always had the raw speed, it was just developing his technique, but now he's able to put it all together. On an average weekend, the work I do with him is to go through all the data and help him fine-tune his performance."

Shields is planning to compete in the Mini X30 class in 2018. 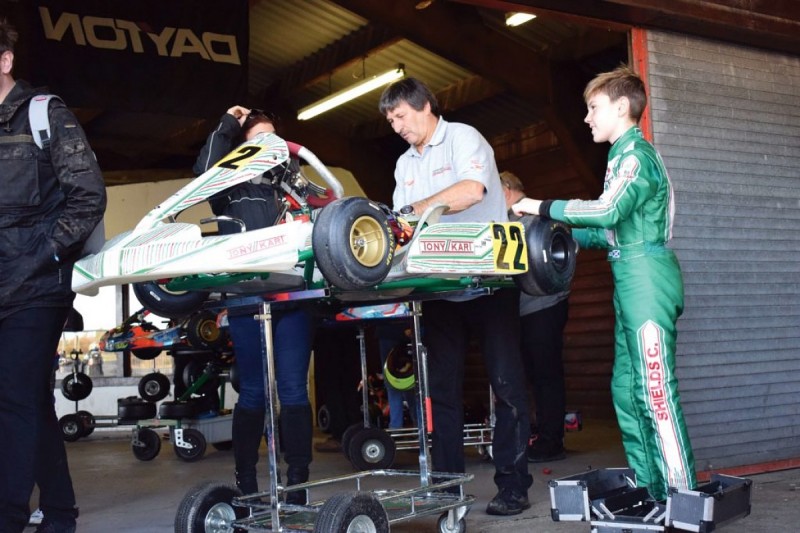 A weekend in Cadet karting

The most striking thing when walking into a karting event is the sheer size of the paddock. Teams taking part in the final NKF round of the season have awning set-ups that are a far cry from the 'dad-and-lad' past most picture.

However, some teams aren't as large as the big boys like at Strawberry Racing and Fusion. The likes of Shields are taking on - and frequently beating - the big names with smaller operations. Shields is joined for the season finale by Iain Brown, who introduced Cian to the sport.

Along with Brown is his son Finlay, also racing in IAME Cadets, and the small privateer team all work together with Cian's trusted mechanic Jim, driver coach Macdonald and his father Jonny, who owns successful engine builder Shox Performance.

Friday and Saturday testing is when Jonny is generally the busiest, with different drivers in the paddock testing engines to maximise performance and increase chance of victory. Drivers learn how to dial in the set-up, with everything from tracking to wheel caster and choosing the right sprocket to aid with gearing under the microscope.

For Shields it is also an opportunity to become more familiar with the quirks of the circuit. A successful dry test on Friday is followed by torrential downpours, which lead to a day of wet practice on Saturday.

Macdonald isn't concerned: "Cian is a natural in the rain. I think it helps that a lot of his experience when he was a new karter was in Scotland, which is pretty wet! He is brimming with confidence at the best of times, and that really shows when he is racing in some pretty horrible conditions." 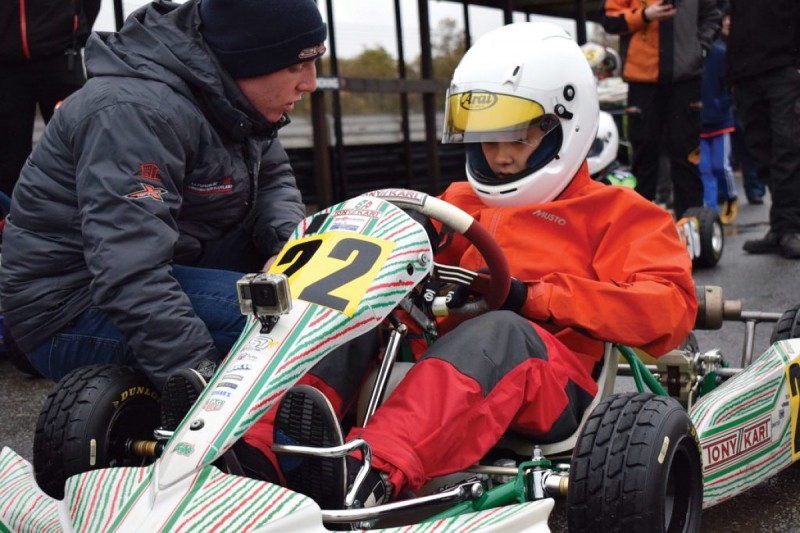 Confidence is one of the most important elements for a karter. With more than 40 evenly matched racers competing in one pack, knowing you'll be able to squeeze through a minute gap requires commitment.

That certainly pays off on race day, when scoring as many points as possible in the three heats is the main order of business. Karting works much the same as rallycross, where the accumulated points from all three heats decide the starting position for the final.

Starting eighth in heat one, a great double early overtake helps Shields start Sunday with a victory. After the heat, there is little time to relax as Macdonald pulls Shields aside to pore through the data.

To the untrained eye, the series of peaks and troughs mean little, but to Macdonald this is the story of Cian's race and he is quick to suggest tweaks for the next heat, the most important of which is not braking so hard for the 90-degree right-handed turn one. Macdonald explains that, with these karts having so little power and the tyres being so durable in Cadets that they don't need to be managed, it is important to carry speed through the corner as the karts won't accelerate quickly.

After a brief discussion about tyre pressures with Jim, Shields is out again for his second and third heats. It is clear Dean's advice has paid off as he claims a pair of sixth places, having started 11th and 21st respectively. His combined results secure him a second-row start in the 'A' final. 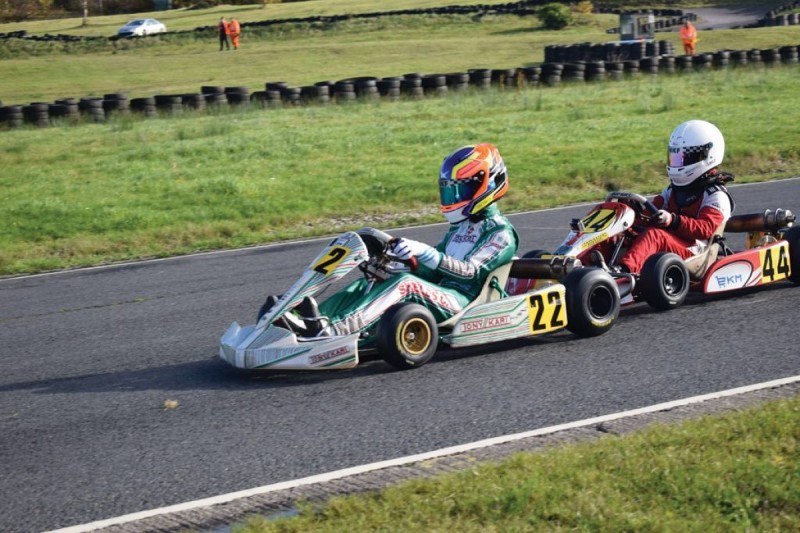 As the afternoon builds to its climax, the nerves round the paddock similarly start to rise. For many, this is their final race of the season and for some - like Shields - this is their last event before moving into another category and they want to cap it with victory. The final delivers intense battling, with Shields slugging it out with drivers who have raced Cadets for a lot longer.

No-one is able to pull a decent advantage and the top eight are inseparable, with the order changing constantly. Coming into the final lap, Shields is lying in third and looking to claim second. Sticking close to the kart in front he gets a better exit off the final corner - a right-hand kink where Jim and Dean kept reminding Shields that quick steering inputs were key - and takes second place by 0.02 seconds.

Getting started in karting

Getting started in the world of karting can be a daunting prospect. With a variety of junior classes and a wide-range of championships to compete in, it can be confusing for someone not familiar with the scene.

Thankfully Dean Macdonald has shared some tips with Motorsport News for anyone looking to get started. First buy a kart and an engine. For eight to 13-year-olds there are two main options - IAME Cadet and Honda Cadet, both of which are great to get the hang of racing a kart.

These then progress into junior and then senior categories too. Macdonald explains that championships range from events that take place solely at one track, to contests that take in all corners of the UK.

"The best way to start is get along to your local track, somewhere like Larkhall, which runs a club championship all year, which is great for beginners," he says. "After that, you can move up into regional championships like Little Green Man and then you've got the best of the best racing in Super One - the British Karting Championships."

Most importantly, Macdonald believes there isn't a 'set' way for young racers to progress up the ladder, with drivers racing in championships like the Clio Cup and British F4 all taking different paths on their way to a car racing career. 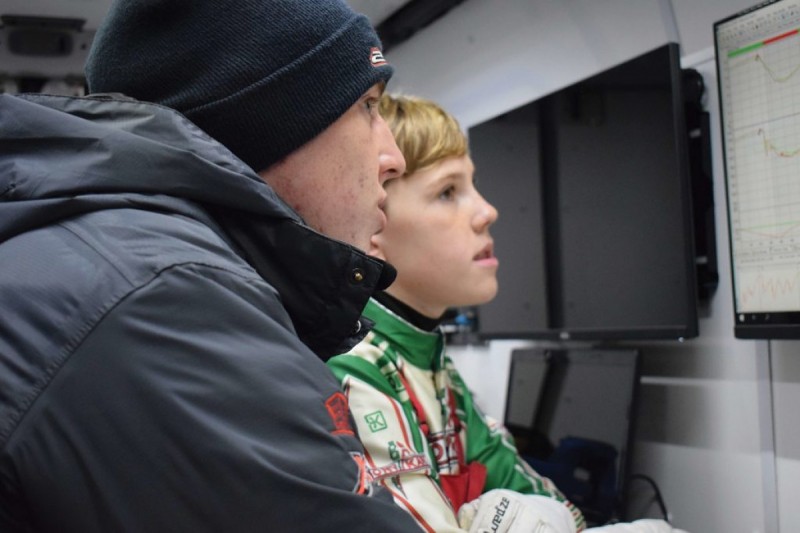 Taking podium finishes - like Cian Shield's at Three Sisters - isn't just because of the work done setting up the kart, it's the result of weeks of preparation, training and, increasingly, simulator work.

With video games like Project Cars including karts and kart tracks, it has never been easier to practice and test at home. For Shields, that is key for his preparation: "I use iRacing a lot before a weekend, especially if it's a track I'm not that familiar with because people have designed versions of most of the kart circuits in Britain so it's great to be able to practise.

"Some of the tracks aren't quite accurate though, they don't get all the bumps! But it's good to be able to practice different ways around the track and then use that knowledge when I actually get there."

Simulators are something Dean Macdonald is very familiar with, having used McLaren's simulator to prepare for each round of the British GT Championship. However, it's not just simulator work that helps, so can YouTube.

"YouTube is great for learning more about a circuit," Macdonald says. "People upload their laps and Cian is obsessive at watching them! He will spend hours looking at laps and then ask me how they pulled off some of their moves, it really helps him improve his race technique. You can also learn from other people's mistakes."

Drivers need to have a good exercise programme as well because of the physical nature of driving a kart flat-out all weekend. Shields' technique for staying fit between kart meetings is boxing, with the demanding nature of training to be a boxer having a direct benefit on his performance in a kart.

Other drivers in the paddock do everything from rugby to track runs on an evening. The strength training that comes with boxing helps Shields fight the kart around the narrow and twisty circuits that are a well-known feature of UK karting.