The British government has launched a consultation into closed-road motorsports that could remove an obstacle to a Formula 1 street race in London, though grass-roots levels are more likely beneficiaries

UK motorsport's governing body the Motor Sports Association has been pushing for a proposed change in the law that currently prevents motorsport events taking place on closed public roads in Britain.

The focus of the government consultation is primarily on allowing rally stages, sprints and hillclimb events to take place on such roads.

However, while a potential London grand prix would still face a number of obstacles, one restriction would be removed if local authorities were able to suspend the Road Traffic Act without having to resort to an Act of Parliament.

Members of the public have until April 10 to respond to the consultation.

"When you really picture what it [a London Grand Prix] would look like it's truly mind blowing," said McLaren driver Jenson Button, whose team's sponsor Santander launched a major publicity stunt two years ago that involved a computer simulation of a potential circuit incorporating major landmarks like Big Ben and Buckingham Palace.

"The dream has taken a step closer this week, and I'd love to see this amazing concept finally happen."

Acting MSA chief executive Rob Jones has called on motorsport fans to respond to the consultation by following the process outlined on the organisation's website.

"It represents a once-in-a-lifetime opportunity to change the landscape of our sport, allowing local communities across the country to host motorsport events and enjoy all the excitement and economic benefit they bring," he said.

Even if the barrier of securing government approval was removed - or was made less obstructive - and a London Grand Prix secured a space on the F1 calendar, the prospects of it happening are still remote.

Here are some of the key issues EDD STRAW outlined when the idea was first mooted in mid-2012.

FIA regulations dictate a minimum circuit width of 12 metres. While there are exceptions to this that can be agreed with the FIA (such as the Anderson Bridge in Singapore), such reduced widths are rare. Modifications would be required to roads and even buildings to fulfil this requirement.

Road 'furniture' such as bollards, traffic lights and pavements would also have to be removed, which would be both costly and inconvenient.

Holding a street race usually requires extensive resurfacing of roads. The majority of roads feature a pronounced crown, meaning that the highest point is in the middle and it drops away to each side for drainage.

Racing cars on such roads are prone to 'tramlining', whereby the car straddles the crown and is destabilised as only the inside edges of the tyres are making contact with it.

This means that roads would need to be resurfaced either with a limited crown, as in Singapore, or, more likely, as crossfall, where the road surface has one side higher than the other and water drains in one direction. 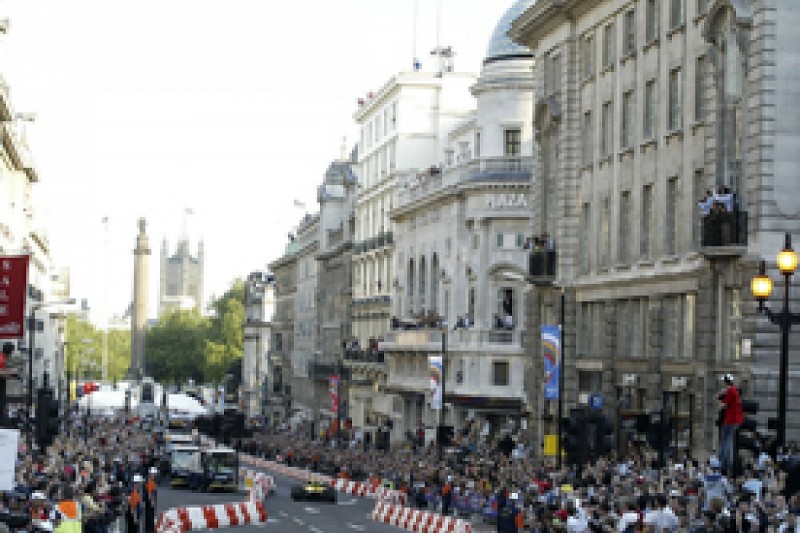 Closing roads for a sporting event would inevitably have a big impact on traffic throughout London. While the likes of Monaco and Singapore are on the coast and have limited throughflow of traffic, London is not.

Its road network is reliant on major arterial bridges across the River Thames and the knock-on effect of a grand prix could be significant, particularly given the inevitable local objections.

While it is possible to use roads at intersections as run-off areas, there would be problems with creating the requisite escape roads in London. In some areas there may not be sufficient space to re-align the track to create the escape roads.

In addition to dealing with the government authority responsible for the roads, communication with private landowners and agencies responsible for public amenities would be necessary. Getting agreement from two, three or more parties for safety provisions could be a serious stumbling block.

The £35 million cost suggested for the Santander track is realistic for year-on-year operation, which includes the difficult logistical challenge of storing the barriers and other track furniture when not in use.

But the cost of creating the track in the first place is significantly higher. It would likely cost £110-140 million to create a London circuit, which includes the construction of a pit complex, earthworks, electronics installation, crowd provisions and road modifications.

On top of that, there would be the race-hosting fee, which could make the event prohibitively expensive even if all other obstacles were overcome. Government funding would be required, something that is very unlikely to be signed off.