Norris will receive a test in a McLaren Formula 1 car and a simulator role with the British team, as well as full BRDC membership and an Arai GP-6 RC carbon crash helmet.

The 17-year-old, world karting champion in 2013, has just completed his second year of single-seaters.

"I've been pretty nervous coming up to it," said Norris.

"It's been great, the racing success this year, but this has really topped it off."

He then moved into a dual Formula Renault Eurocup and Northern European Cup campaign, winning 11 races across the two championships on his way to both titles.

He then made his FIA Formula 3 debut at the end of the year in the European Championship's Hockenheim finale, before charging from 26th on the grid to 11th in the Macau Grand Prix.

Norris's seasonal exploits earned him the British Club Driver of the Year gong at the Autosport Awards, and pitted him against BRDC British F3 team-mate Ricky Collard, Toby Sowery and Sennan Fielding for the main Award. 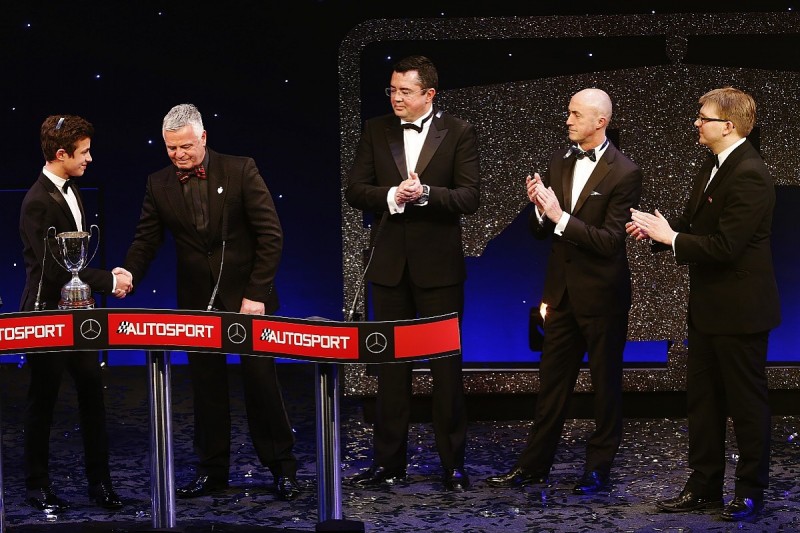 "I need to give a lot of respect to the other drivers - Ricky, Sennan and Toby," Norris added.

"I've raced against them for the past few years, we've given each other a lot of respect and they've made my life hard."

Warwick was joined by Brabham, Turner and McLaren's Eric Boullier to present Norris with the Award.