Igor Fraga made up for his shock exit from the Gran Tursimo World Final Nations' Cup by helping Toyota to win the Manufacturers' Series in Monaco on Saturday.

Toyota and Mercedes headed into the double-points grand final tied at the top of the standings after taking a win apiece in the first two rounds.

Fraga, back in action after a first-corner spin in the semi-final of the Nations Cup on Friday put him on of that contest, earned pole position for the first race at Dragon Trail Gardens and pulled clear in the opening stint.

That gap allowed his Toyota team-mates Tomoaki Yamanaka and Rayan Derrouiche to hold off the pursuing Mercedes, which had taken second spot on the final lap from Lexus with a brave move at the chicane.

In the second race, Mercedes came out on top after capitalising on an early soft-tyre stint to pull clear at Laguna Seca.

Toyota found itself having to stage a major recovery after getting pushed wide at the first corner on lap two when Lexus braked late into BMW, which was pushed into the side of the Supra Racing Concept.

A major recovery drive got Toyota right onto the tail of the Mercedes on the final lap but, despite several attempts to pass the lead car, it lost out by 0.062 seconds at the flag. 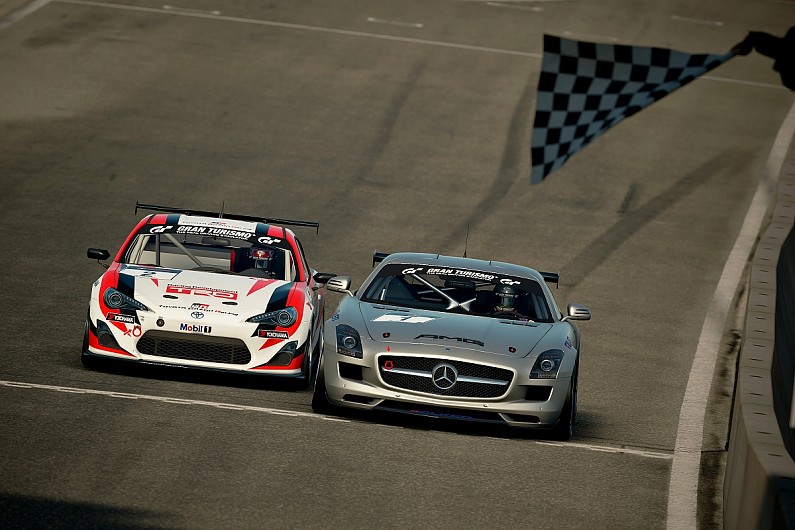 Mercedes led from pole in the grand final at Tokyo Expressway South Inner Loop but it was the Toyota that slipstreamed through into the lead on the long run through the tunnel on the first lap.

Running on hard tyres, the Toyota held on until lap three when BMW took the lead with a move around the outside at the hairpin, and it fell back further on lap four as Mercedes moved up to second.

Mercedes moved into the lead on lap five before diving into the pits a lap later, with BMW electing to stay out for an extra lap.

Toyota, which switched to mediums, passed the Mercedes on lap seven but the defining moment came moments later when the Mercedes, after running wide the hairpin, was squeezed into the barriers by the Lexus.

That incident dropped Mercedes down into the pack, with the Jaguar crew the big winner from the incidents as it briefly ran second behind the Toyota, which had escaped out of slipstream range and was able to break away.

After the final stops, Toyota was unchallenged from the cars behind, and Mercedes was able to recover to second - but it was too late to do anything about the gap to the lead and stop its Japanese rival taking the title.

Third place in the final went to Chevrolet after a chaotic final few laps as the positions changed hands several times, but it was Alfa Romeo that finished third overall in the manufacturers' points standings.

The final of the Gran Turismo Nations Cup takes place on Sunday.