DAMS driver Ticktum led every lap from reverse-grid pole, but a late safety car period threatened his victory as it allowed Lundgaard and others the chance to change tyres a little cost and try and regain the time loss in a three-lap dash to the finish.

The plan came close to succeeding for Lundgaard, who fell just under four tenths of a second shy of victory but recovered to the position he was in when he pitted.

At the start, Ticktum made a clean getaway to maintain his advantage, as ART Grand Prix driver Lundgaard picked off a slow-starting Callum Ilott, Louis Deletraz and Felipe Drugovich to move up to second on the opening lap.

But Lundgaard was unable to make inroads on Ticktum's advantage, and later was forced to turn his attention towards defending from a charging Ilott.

UNI-Virtuosi driver Ilott picked up a five-second time penalty for tipping Carlin's Yuki Tsunoda into a spin at Village on the first lap of 21, causing a brief virtual safety car period, but regrouped to pass Drugovich at Stowe on lap seven.

On lap 13, the Briton passed Deletraz and Lundgaard on the same lap with a pair of around-the-outside passes at Brooklands and Stowe respectively.

Ticktum was 2.6s clear of the field at this point but Ilott started tearing chunks from the leader's advantage, and had closed to within a second of Ticktum when he spun exiting Vale on lap 15, stalling and ending his charge.

That brought out the safety car, as well as eradicating what had become a four-second buffer out front for Ticktum. 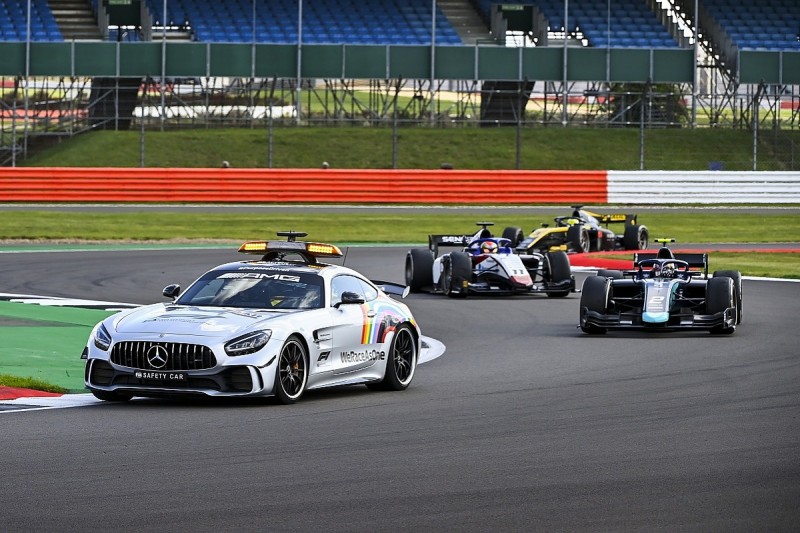 With the field filing through the pitlane while Ilott's stricken car was retrieved, ART pounced on the chance to put Lundgaard on a fresh set of medium-compound tyres, the Danish driver only losing three positions in the process.

That meant Ticktum would lead Deletraz at the restart on lap 19, with the remaining UNI-Virtuosi car of Guanyu Zhou promoted to third, while race one winner Nikita Mazepin lost fourth to a charging Lundgaard into Village.

On the next lap, Lundgaard dispatched Zhou at Brooklands and at the start of the final tour he picked off Deletraz at The Loop. But the one-second buffer Ticktum had at this point was just enough for him to hold off Lundgaard at the chequered flag.

Behind the lead pair, Charouz driver Deletraz completed the podium in third, his pressure eased by Zhou spinning away fourth place on the last lap at Chapel.

That promoted Jehan Daruvala (Carlin), another driver to take the chance to take new tyres under the safety car, to fourth, the Indian driver having taken the restart in 10th.

Mazepin came home in fifth ahead of the two MP Motorsport cars of Drugovich and Nobuharu Matsushita, while Campos man Jack Aitken completed the scorers.

Prema opted to change both Mick Schumacher and Robert Shwartzman onto new tyres, but only did so after another lap had passed and the field had bunched up more, with Shwartzman losing time stacked behind his teammate and then with a slow stop.

The points leader therefore finished down in 14th, a place behind teammate Schumacher.

With closest rival Ilott failing to score, Shwartzman maintains a lead of eight points at the head of the standings, with Lundgaard moving to within 12 of the leader, boosted by taking the bonus points for fastest lap.