Rowland was leading the first race at the Hungaroring with three laps to go when Markelov attacked on the pit straight using DRS.

DAMS driver Rowland moved to the right and as Markelov closed in rapidly, the Russian went onto the grass, lost control and went backwards into the Turn 1 barrier.

Markelov climbed gingerly out of the wreckage as the medical car attended the scene but is expected to be fit to compete in race two on Sunday.

The race ended behind the safety car and Rowland faced an investigation into his move but the stewards decided he had not broken any rules and will therefore keep his second F2 feature race win of 2017.

"He got a pretty good run out of the last corner, I was struggling a bit with the tyres," Rowland said.

"I defended to the inside - I'm not really sure where he was trying to go.

"The rule is if you have any part of the car alongside then you've got to leave one car [width] but he was still behind me when I closed the gap.

"From my side of things I didn't go away from the rules - I don't think I did anything wrong. 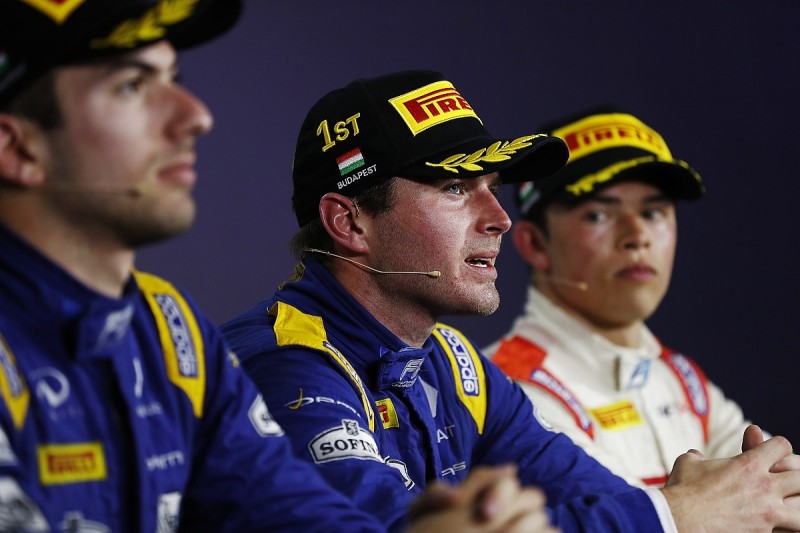 Markelov, who left the track soon after being checked by medical staff, did not blame Rowland for the crash.

"It's racing, I saw the opportunity, had DRS, and just went for it because we definitely had winning speed," he said in a statement.

"Rowland went right but I was committed the same way and ended up on the grass, after which I was just a passenger.

"He was never going to open the door, so I don't blame him, I blame myself."

"It was under the rules but it was too tough - too hard - because Artem was much faster because he had DRS," she told Autosport.

"But the main thing is Artem feels OK because the crash was really big for him.

"Of course [we accept the decision] - Artem admits himself that he was too optimistic."

When asked if Markelov would be fit to race on Sunday, Strelnikova said: "I think so, yes, the doctors said yes."

DAMS team boss Francois Sicard lamented the ending to the race, which resulted in a double podium for his squad as Nicholas Latifi finished second behind Rowland.

"What happened is unfortunate, we never like to finish a race like this as it's been such good competition between Artem and Oliver, and Russian Time and DAMS," Sicard told Autosport.

"We hope Artem will recover well and soon."