ART Grand Prix driver Lundgaard made light work of Ticktum in the opening laps and then broke free of DRS range to cruise to a consummate two-second triumph in his fifth F2 race.

DAMS pilot and 2018 McLaren Autosport BRDC Award winner Ticktum lined up on pole for the partially-reversed grid and launched well to hold position into Turn 1.

As he pulled to the middle of the circuit to maintain track position, it allowed the fast-starting Lundgaard to relegate team-mate Marcus Armstrong down to third.

Although he did well to keep the Prema Racing machine out of the barrier, the Ferrari junior retired on the spot.

Ticktum enjoyed a fantastic restart, but Lundgaard was able to reel him in by close to 0.3s per sector and soon latched onto the Briton's rear with an early fastest lap to boot.

Lundgaard made a play for the lead at the first opportunity, hitting the brakes super-late on the approach to Turn 3. 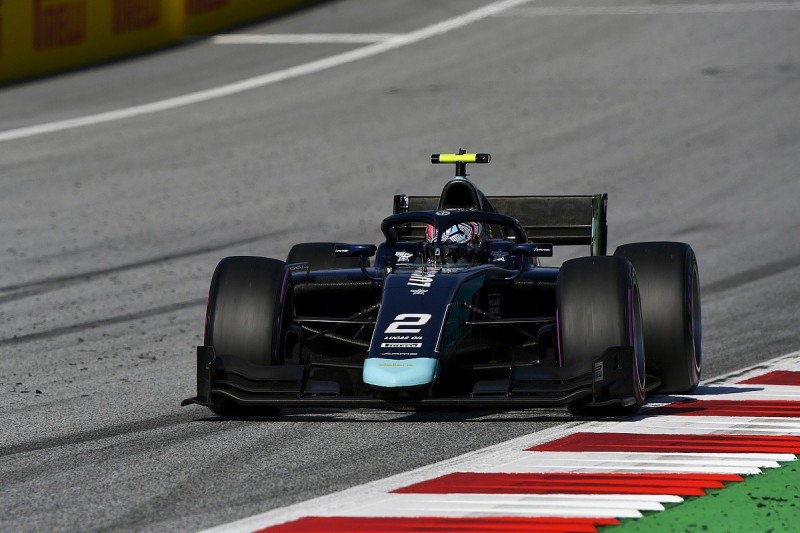 Ticktum saw the advance coming and didn't attempt to block the move. Having still been in second as the pair crossed the DRS detection line, Lundgaard had the boost available on the run to Turn 4 and easily cleared Ticktum down the straight.

By lap seven the battle for victory was more or less over, as Lundgaard pulled out a 1.7s margin.

He was the only driver to lap in the 1min16s, 0.5s faster than his British rival.

The gap peaked as 3.3s in Lundgaard's favour but Ticktum was able to close in the final laps, despite a couple of sizeable lock ups, which tore life from his front tyres.

Lundgaard became the fourth different winner in as many races in 2020 and Ticktum also scored his best series result, while Armstrong rounded out the rostrum after misfortune struck Schumacher.

The German looked set to bring home his second F2 podium, having lunged by Armstrong on the approach to Turn 4.

With the DRS boost, Schumacher slung his car around the outside to beat the Kiwi driver to the apex - both doing well to avoid any contact.

But Schumacher was down on his luck, as with 15 laps to run the fire extinguisher aboard his Prema car activated through Turn 9 and showered the cockpit in foam.