Deletraz was up to pace immediately as the track action got underway at 9am local time, lapping the circuit in 1m41.827s just 17 minutes into the session to snatch the top spot early on.

That time would remain unbeaten throughout the day, with no other driver dipping into the 1m41s after six hours of running across two sessions.

Carlin's Jehan Daruvala finished second on Thursday after topping the opening two days of running, with his morning effort of 1m42.005s putting him 0.178s down on the Swiss driver.

However, the Indian driver still ended the three-day test the quickest of all thanks to his Wednesday benchmark of 1m41.686s.

Red Bull junior Juri Vips (Hitech) finished just over a tenth adrift of the leading duo in third, with Dan Ticktum not far behind in fourth on another strong test day for Carlin, which finished third in this year's standings behind champions Prema and second-placed UNI-Virtuosi. 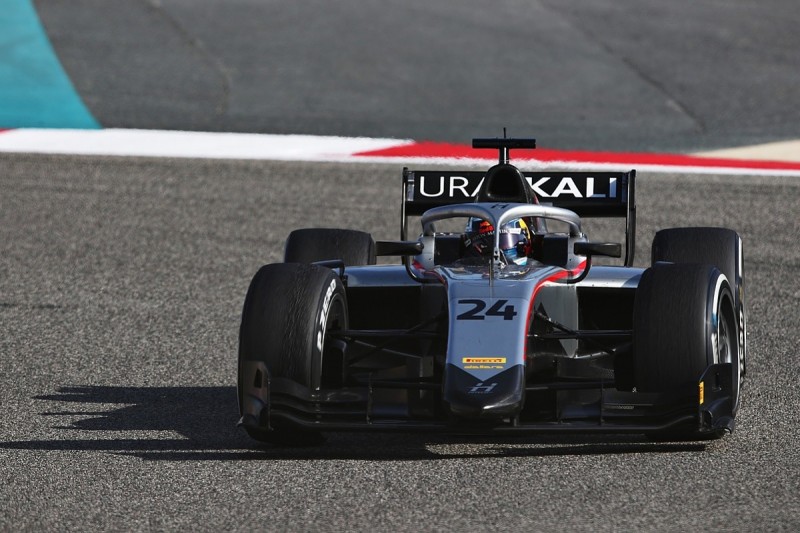 Liam Lawson was the top Formula 3 graduate in fifth, the Hitech driver ending the day just 0.002s off Ticktum's best time of 1m42.302s.

MP Motorsport's Lirim Zendeli, UNI-Virtuosi driver Felipe Drugovich and Campos' Ralph Boschung were all separated by less than a tenth of a second in sixth, seventh and eight respectively.

Samaia had briefly led the afternoon's proceedings before being shuffled down the order, as Drugovich was quickest in the afternoon session with a 1m42.435s lap - his best time of the day.

F3 champion Oscar Piastri was three tenths away from Drugovich in the afternoon's times, ahead of DAMS' Marcus Armstrong, Robert Shwartzman of Prema, and Clement Novalak - who drove for Virtuosi on the final day of running in place of Guanyu Zhou having driven for Trident in the first two days.

Boschung and Bent Viscaal (Trident) stopped on the start/finish straight in the morning session, enduring separate mechanical issues, and were unable to return to the track for the rest of the day.

There was only a single occurrence of the red flag in the afternoon session, called for the stranded ART-run machine of Theo Pourchaire, deployed just after the halfway mark and lasting less than five minutes.

Red Bull junior Vips to race in Formula 2 next year