GP3 runner-up Dean Stoneman escaped injury from a heavy accident on the opening day of Formula Renault 3.5 testing at Jerez on Thursday afternoon.

The Briton's DAMS car was reportedly destabilised by a strong gust of wind at the fast, left-hand, Turn 7 during the afternoon session.

Stoneman initially hit one wall, before sustaining a second heavier impact against another barrier that caused the car to spin several times and throw the gearbox clear of the car.

Stoneman spent 20 minutes in the Jerez medical centre being checked over, before receiving the all-clear.

The accident occurred on lap 14 of a 20-lap run. Although Stoneman reported no after-effects from the crash, his physio has advised him to consume some sugary food to minimise possible delayed reactions caused by stress on the body.

Despite the spectacular nature of the shunt, Le Mans-based team DAMS believes the car is repairable.

If replacement parts are on hand, Stoneman should run on Friday's second day of testing.

For close to an hour during the early part of the afternoon session, Stoneman rehearsed pitstops, something he has no previous experience of in his racing career, and practiced starts. 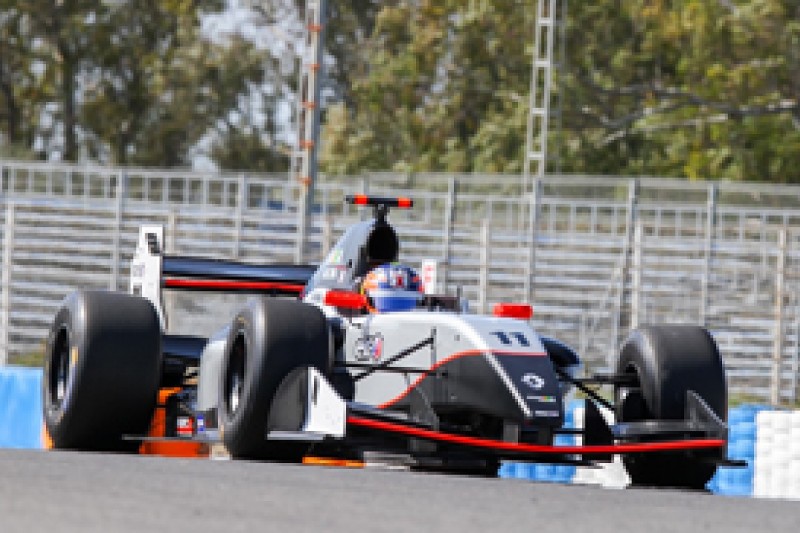 Ellinas set the fastest time of the day overall.

Spaniard Merhi was the pacesetter of the 22 drivers present in the morning session thanks to a time of 1m27.579s on his first day running for Pons Racing.

Draco Racing's Pietro Fantin was one of several drivers to suffer an incident in the morning, amid eight interruptions, but recovered to take fourth fastest on the opening session.

Recently announced Fortec signing Jazeman Jaafar was fifth quickest in the opening session and third in the afternoon, ahead of an under-the-weather Beitske Visser.