Motorsport is the ideal incubator for new technologies, and with the advent of autonomous cars on the domestic market, mixing the two makes a lot of sense, despite many conservative fans' disdain for races without drivers

To be run as a support category at Formula E events, Roborace will pitch teams of software engineers - rather than drivers - against one another in motorsport's first driverless series.

Following its launch last year, and with the first race planned for the 2016/17 season of Formula E, the concept for the Roborace car has now been launched.

Quite how far this goes in also providing the powertrain and 'thinking' power for the autonomous systems is yet to be announced, but the freedom of a one-make series without the need to host a driver clearly opens up a creative stream not seen in any other category.

The unveiled Roborace car is a futuristic concept, unattached to race car conventions. It is even the brainchild of a man, Daniel Simon, whose background is in science-fiction movie styling.

Designed by Simon - or perhaps styled, as the chief design officer admits he was assisted by a "racing engineers and aerodynamicists" - the car aims to strike a balance between style and performance.

A lot of the detail visible around it is extraneous gadgetry to get the high-tech look that Simon was looking for. It appears to be straight off a sci-fi film set.

Looking beyond the non-functional parts, it's clear there is a race car of quite clever design beneath.

Not requiring a driver, the needs for a cockpit opening and roll structures are redundant. So the central core of the car is a long beam, which will presumably contain the electronics to provide the artificial intelligence to guide the car around the track.

That said there is little provision for cooling. The car will still require a substantial battery and eMotor for propulsion, suggesting this design is just a styling concept and not a fully working vehicle.

Aerodynamically, the car sports two key features; the enclosed wheel arches and the shaped underfloor. The pods wrapped around the wheels would serve as a drag-reduction aid and as a 'bumper' for unintended contact with other cars and the barriers. 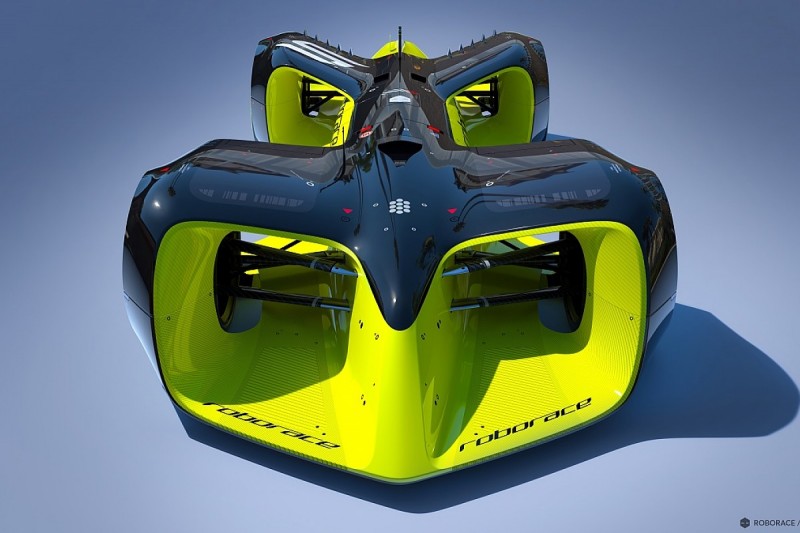 But the suspension - classic pushrod double-wishbone, providing wide track for low-profile tyres on deeply offset wheels - is fully exposed, as are the inner and outer faces of the spinning wheel, which would be a key source of drag, costing speed and battery power through the race.

These pods are mounted by apparently superfluous fins. Albeit with what appear to be aircraft-like ailerons on the trailing edges, these might be mere decals or allude to the "active aero" mentioned in the launch press release.

Wisely, the concept plans to exploit underfloor aero for its downforce. Without a clear view of the rear it's not obvious how this would be achieved, but a shaped ground effect underbody is formed in the wider floor section under the chassis.

Another key aspect of the car's exterior is the space provided for livery. With no conventional driver personality, the car itself will need to provide a degree of individuality to capture fans' attention, while also providing space for commercial branding.

The latter is clearly required to help investment in software developers and hardware to allow the car to qualify and race autonomously, having to cope not just with being fast around one lap alone, but also being strategic when overtaking or defending in a race situation. That is something many human drivers struggle with, let alone a bunch of coded algorithms in an onboard computer.

While the chassis and aero design is obvious, the powertrain is yet to be detailed. It will clearly be electric, and with what appear to be driveshafts on the front and rear ends, the car may have two eMotors for four-wheel drive.

A physical car and the first race is still some way off, but already the prospect of seeing a grid of these cars set off to race around a city centre is exciting, driver or no driver.