Buemi and Lucas di Grassi, who went on to finish second in a race won by Techeetah's Jean-Eric Vergne, saved enough energy in the first stint to run two laps longer than most of the pack.

Di Grassi emerged from his car swap in fourth place and went on to join the podium fight, but Buemi could not make similar progress.

As he ran behind Venturi's Maro Engel, the Renault e.dams driver was passed by Daniel Abt before getting back past in a last-lap coming together with the Audi racer, and he eventually finished fifth after the dramatic collision between Andre Lotterer and Sam Bird.

"[My race] started very well - I was able to pass two guys at the start so I was running P6 and I was on a completely different strategy, going very long," Buemi told Autosport.

"I was competitive with energy saving - I was really good at that and I thought I had made [it through] the most difficult [bit] because then when I went back I thought I would be competitive. 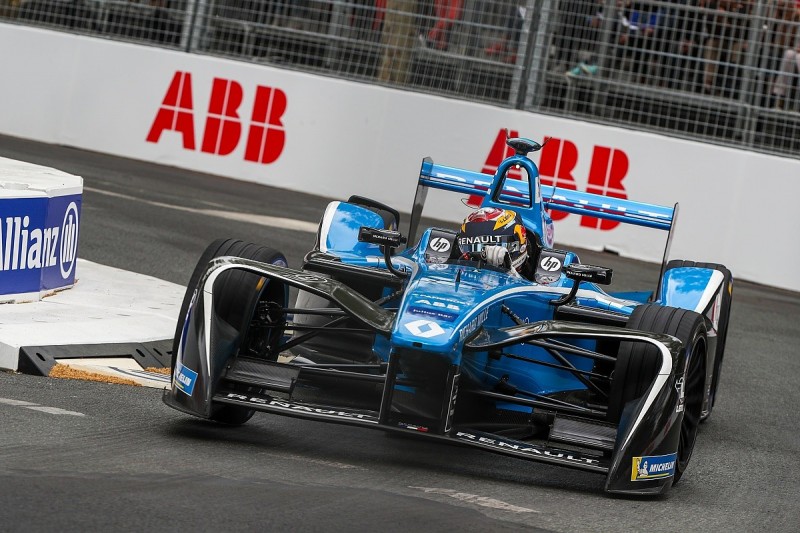 "But somehow I was struggling to use the extra energy.

"I had too much front end and I was sliding and had the energy but I could not use it."

At the previous FE race in Rome, Buemi slipped back in the second stint to due to an energy recovery problem that meant he had to lift off the power, costing him time.

In Paris, the 2015/16 champion felt he had a problem "completely the opposite to Rome" - plenty of energy that he was unable to use due to the handling of his car.

"I focused massively on making sure I was charging the battery as much as possible - that's why I went two laps longer, like Lucas," he said.

"But then with the second car I couldn't make use of extra energy, so I'm disappointed because after the first stint I thought 'woah, now let's see'.

"It was just the set-up [in the second car]. We tried to put too much front end and I couldn't use it. I'm disappointed because we'd done a good job on energy saving."

After he had completed his pitstop, Buemi was pictured grappling with a loose lead at the top of his helmet for the first few corners - a situation he called "[a] big mess".

"I tried to connect it," he explained, "I couldn't connect it because of the corners and then I connected it after."