Formula E test analysis: Audi Sport Abt a step ahead at Donington

Team-mates Daniel Abt and Lucas di Grassi each lowered the previous unofficial lap record in the second pre-season test at Donington Park, with di Grassi's 1m29.920s the first sub-1m30s lap for the series at the track.

It led Abt to declare the team was "a step ahead" with its Abt Schaeffler FE01, a bold claim given there are two days remaining and the street track set to greet the championship in Beijing, the first round, is a very different prospect to Donington's sweeping curves.

Brazilian di Grassi played down the significance of Abt's headline pace, but the team is in a strong position heading into the final test, where it will be able to focus more on reliability knowing its performance runs - with 200kw of power and new tyres - have been a success.

"Everything is under control," said di Grassi. "To achieve what we have achieved already is definitely a step up."

Abt and the e.dams Renault team have looked particularly strong when performing longer runs at lower power, but Sebastien Buemi and Nicolas Prost have not been able to produce the same pace in qualifying trim in their Renault Z.E.15.

However, Buemi's theoretical best lap on Tuesday would have put him close to di Grassi, and the reigning World Endurance champion is not overly concerned - despite him and Prost suffering on-track breakdowns over the two days.

"We have a lot of work to do, maybe more than some of the other people," said Buemi. "We've been running behind in the programme - it's been a bit messy and the laptime didn't come."

The DS Virgin Racing squad was deceptively far down the times in the second test - Jean Eric-Vergne was sixth and more than a second behind di Grassi on Tuesday.

But the Frenchman set the best first sector of anyone before fading as the lap wore on, suggesting the radical, single-gear Virgin DSV-01 has unlocked potential.

Reigning champion Nelson Piquet Jr did not trouble the leading times as the Team China Racing outfit looked to make up ground after barely running in the opening test.

Neither Piquet nor Oliver Turvey completed qualifying runs in their NEXTEV TCR 001s in the second test.

Cranking the powertrains up to 200kw and bolting new tyres on is worth up to four seconds. If Piquet's 1m34.133s was set at 150kw it puts it right in the ballpark, though given Turvey feels there is more progress to be made it is more likely the Brazilian was running at the expected raised limit of 170kw.

PURSUIT OF RELIABILITY CRUCIAL FOR STRUGGLERS

A substantial amount more is required for Andretti Autosport and Trulli GP after miserable pre-seasons so far - Andretti has managed a handful of installation laps, whereas Trulli didn't even make it to the garages this week.

Reliability has not been a concern for Team Aguri, which was the only outfit to go with the Spark from the outset. The decision that has left it mid-pack in the times - a position also adopted by Venturi and its customer Dragon Racing, the only powertrain alliance on the grid.

Aguri boss Mark Preston is predicting the season-one McLaren motor/Hewland gearbox package will be capable of lapping within half a second of the new e.dams Renault - while the team will hope its rivals do not make swift gains on reliability over the final two days.

Nick Heidfeld's Mahindra team has racked up good mileage between the German and Bruno Senna, and was in among the Abt and e.dams Renault drivers after the qualifying runs in the second test.

Heidfeld has plenty of experience with dealing with the misleading nature of pre-season testing, but believes Donington is providing pointers for the coming season.

"You're not sure where you stand, but if you see quick laptimes, people are quick," he told AUTOSPORT.

"I think you can read something into that. But you will only know in Beijing." 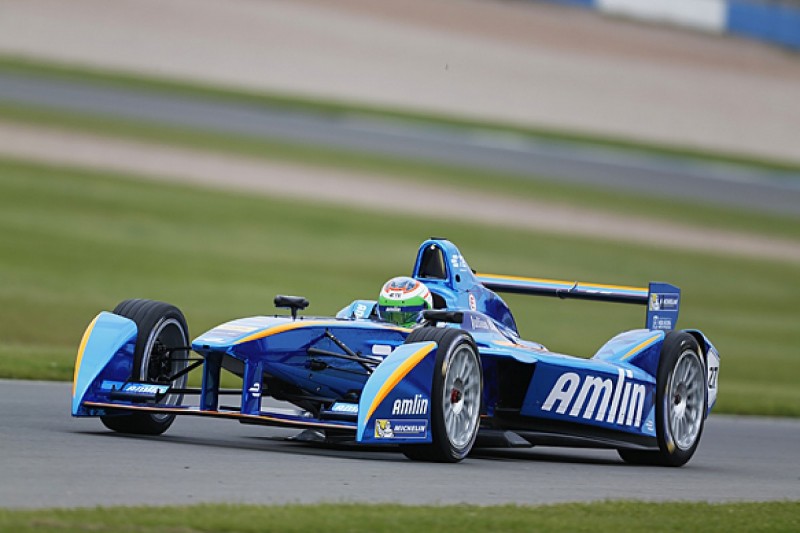