At the start, polesitter Rosenqvist led away ahead of Bird and Jaguar driver Mitch Evans. While Vergne survived being hit from behind by Alex Lynn.

Rosenqvist edged away from Bird early-on, with Evans and Lotterer falling behind as they opted to save energy and run a lap longer in the opening stint.

Bird closed back in on Rosenqvist before they both pitted on lap 16 of 33. Rosenqvist maintained the net lead of the race as Evans, Lotterer, Daniel Abt and di Grassi stayed out for an extra lap.

As those four returned to the track, the race was neutralised with a full course yellow following Lynn, who stopped at Turn 10, and a four-way incident at the Turn 13 hairpin involving Oliver Turvey, Nick Heidfeld, Luca Filippi and Edoardo Mortara.

Bird closed in on Rosenqvist when the race resumed, with Evans five seconds back and engaged in a scrap with Sebastien Buemi, as further back di Grassi passed Lotterer.

Evans had just deposed Buemi for third when Rosenqvist suddenly slowed and stopped just past the finish line after he clipped the kerb at the Turn 18/19 chicane, which appeared to break his left-rear suspension.

Bird enjoyed a lead of 3.2s over Evans - with di Grassi fighting his way past Buemi for third shortly before a second FCY was deployed to allow Rosenqvist's car to be recovered. 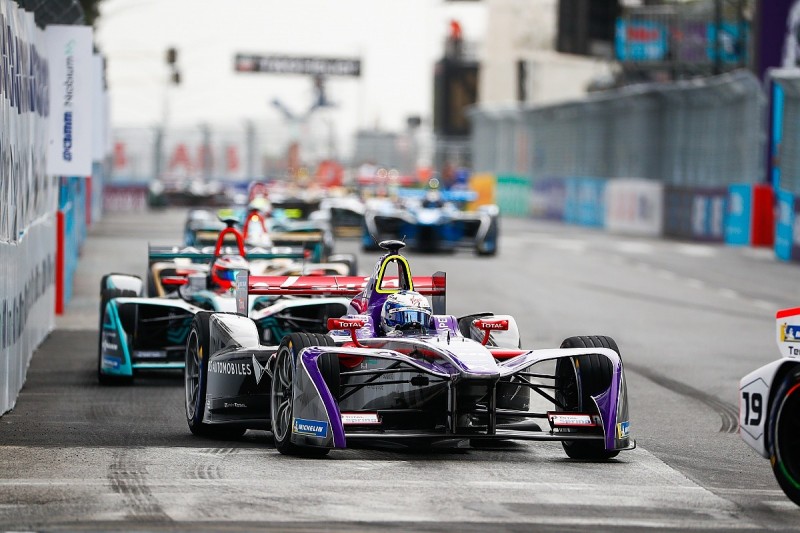 After the restart, Evans used his energy advantage to close in and attack Bird, with di Grassi in close company and Lotterer making it a four-way fight for the lead after passing Buemi.

Evans attacked Bird the bumpy uphill Turn 9 on lap 29, but the Briton defended the inside and Evans lost momentum.

Bird then enjoyed some crucial breathing space in the final laps as di Grassi pressured Evans and passed him at Turn 9 on two laps to go.

Lotterer also got by on the final lap by going around the outside of Evans at Turn 10.

Di Grassi charged up to Bird but could not get by and the Virgin Racing driver held on to win by 0.970s. But di Grassi finished the race facing an investigation for his car swap procedure.

Evans could not make his energy last and he tumbled to ninth at the finish, with Abt fourth.

Vergne, who had scrapped with Abt and Buemi in the second half of the race, finished fifth after passing the Renault e.dams driver late on.

Jerome D'Ambrosio rose from 18th on the grid to take seventh, ahead of Maro Engel, with Mortara rounding out the top 10. Nelson Piquet was the only other retirement after stopping in the pitlane after changing cars.