The top nine spots in the second session were filled by drivers from nine different teams.

Earlier in the day, Renault e.dams driver Sebastien Buemi set the fastest time in FP1, and the 2015/16 champion was one of the first drivers to go for a full power 200k/w effort in the second session.

But the former Toro Rosso Formula 1 driver encountered heavy traffic - a problem that impacted drivers up and down the field throughout practice - and although he took the top spot, he was quickly shuffled down the order.

Championship leader Jean-Eric Vergne then briefly took first place before NIO driver Oliver Turvey usurped him at the head of the times.

The 30-minute second session was disrupted by a heavy crash for Andretti's Tom Blomqvist, who clattered a big kerb at the second part of the Turn 10/11 chicane just after he clipped the wall running onto the back straight following the double left-hander at Turns 8 and 9.

The impact on the kerb swung Blomqvist's car around and he hit the wall hard, destroying its left-rear.

After a six-minute delay, the session resumed to allow the drivers to make their final preparations ahead of qualifying.

Di Grassi seized P1 with a lap of 1m13.672s, but only set a personal best time in the first sector, suggesting he could have gone faster.

Turvey improved his best time but was shuffled down to fourth by the late efforts of Evans and Bird.

Nico Prost jumped up to fifth late on to head Vergne and Edoardo Mortara.

Mortara damaged his car's survival cell at the second chicane on the track's return leg, Turn 14/15, during Friday's shakedown, which necessitated an overnight change. 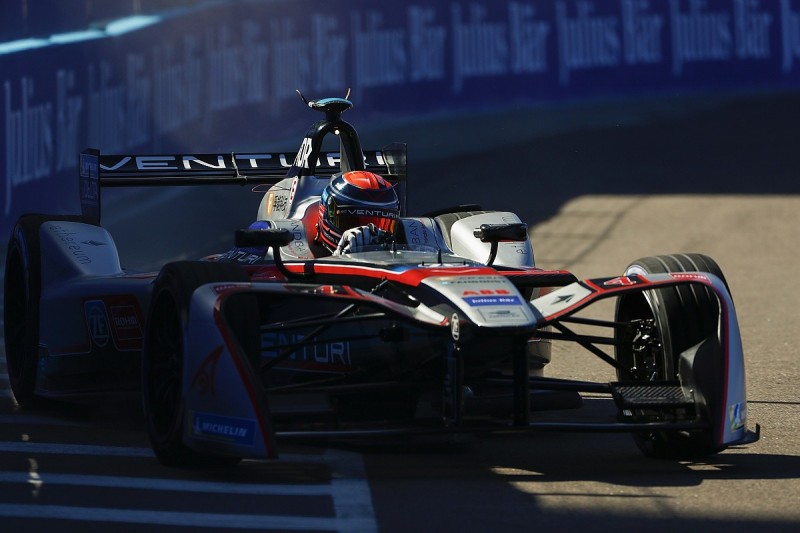 He was initially hit with a 10-place grid penalty, but had that rescinded by the stewards because a "sufficient repair of the chassis is not possible" in Punta del Este.

He will be able to use the replacement in Uruguay as well as at the Rome and Paris rounds, but will have to switch back to the original cell for May's Berlin round if it can be repaired.

Nick Heideld improved from 13th in FP1 to eighth overall following the second session, with Buemi's traffic-hit laps meaning his best time from first practice put him ninth in the overall order.

Blomqvist rounded out the top 10 despite his crash, ahead of Virgin's Alex Lynn.

Luca Filippi was 13th after practice and the NIO driver was reprimanded for his practice start following FP1.

Drivers are required to line up in single file when doing so. He was then place under investigation during FP2 after allegedly speeding under the red flag.

Nelson Piquet, who spectacularly held an oversteer moment at the final hairpin late on, headed Mexico winner Daniel Abt and Techeetah driver Andre Lotterer in 16th.

Felix Rosenqvist set a purple first sector during a full power effort in FP2, but had to back out of the lap and wound up 20th and last overall, one spot behind his earlier finishing position in first practice.