Evans crossed the 4.2 seconds clear of Antonio Felix da Costa to bag his second series win, but had been a massive 7s to the good with a handful of laps to run.

At the start, Evans and Lotterer made similarly subdued getaways from the front row and that allowed Mercedes' Nyck de Vries to threaten them on the approach to Turn 1.

Evans, on the inside line, dived alongside Lotterer under braking and locked up, with the pair making contact as Lotterer tried to defend his lead, which pushed him out on to the grass and he fell down to fifth after further dramas around the first lap.

From there, Evans led the remainder of the race and never faced a genuine challenge to his lead, including managing a safety car restart that followed Nico Muller crashing out at Turn 1.

De Vries had aborted a possible move on Evans into Turn 3 on lap one of what would become a 36-lap race when the rear of his car snapped, which allowed Nissan e.dams driver Sebastien Buemi through to take second two corners later.

With de Vries further delayed as he struggled early on, Lotterer was able to recover to third before the race was paused by the safety car appearing after Muller's accident, which happened as he was trying to pass de Vries around the outside at Turn 1.

Mueller attempted to make the corner but carried too much speed and ploughed into the barrier at the exit. With Evans safe at the restart, Sam Bird (Envision Virgin Racing) made a robust move on Lotterer into the stadium section for grab third place.

That put Bird's team-mate Robin Frijns on course to pass Lotterer as well, and Lotterer's attempts to defend were insufficient, which meant also de Vries got back by.

As Lotterer continued to drop down the order, he then whacked the wall on the exit of Turn 3 - and the impact caused a front-right wheel cover failure.

The bodywork then dropped on to the tyre as he rounded the final corner, which left a plume of smoke down the main straight as the corner of the bodywork then caught fire. 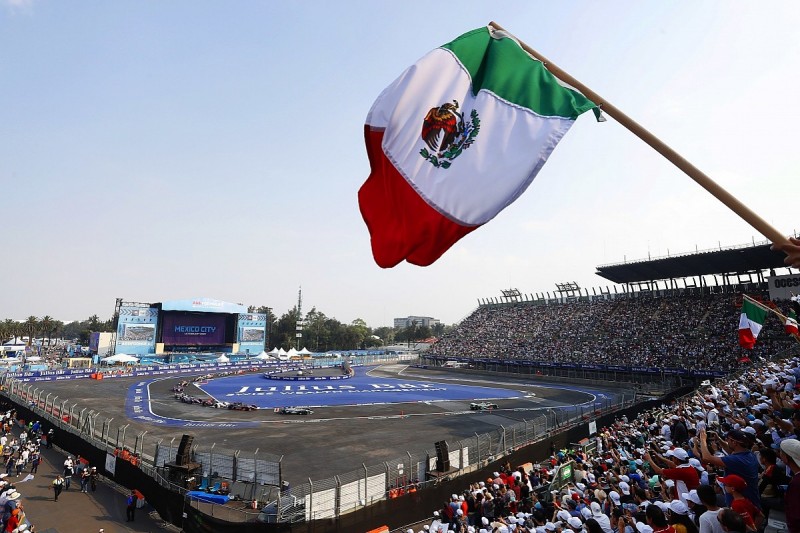 With Lotterer out the equation, the DS Techeetah drivers once again faced team order drama in their battle as they closed on Buemi - who had been passed by Bird - for third.

But as da Costa finally broke free with more useable energy, he slashed the margin and made a simple move round of the outside of Turn 9 before setting off after Bird.

A lap later, Bird activated his last of three attack modes - only the second time FE has had more than two in a race - and was delayed as he ran off line.

That brought da Costa side-by-side around the outside of the Peraltada corner, with Bird narrowly holding on.

But under the pressure Bird ran too deep into Turn 3 on the following lap and he nosed into the wall.

He managed to rejoin but then crashed in the stadium section, where he remained stranded for the rest of the race.

That gave da Costa a fortunate and at one stage unlikely second place ahead of Buemi and Vergne in the final standings.

He's front bodywork came off as he trailed back to retire in the pits as Evans, who eased off during the late-race drama following instructions from his team, crossed the line.

Sims now sits one point adrift of new championship leader Evans. Lucas di Grassi lost out to BMW Andetti driver Sims late on but, secured sixth from 15th on the grid ahead of Oliver Rowland and Edoardo Mortara.

After qualifying 17th, Evans's team-mate James Calado moved up to ninth, with Pascal Wehrlein rounding out the top 10.

That result came despite Werhlein serving a drivethrough penalty on the opening lap owing to both Mahindra cars exceeding the two-gearbox limit for the season ahead of the race.

His team-mate Jerome D'Ambrosio, who had to serve a different stop/go penalty for the same infraction but had the additional time required as he qualified outside the top four, finished 11th.

Robin Frijns dropped from fourth after an issue activating attack mode, but the main reason for his fall was a coming together with de Vries, when the Mercedes driver tried to fend off da Costa's surge towards the podium.

De Vries and da Costa appeared to touch as they approached Turn 1 while running tight to the pitwall, with De Vries then locking up and catching the innocent Frijns, who was just ahead on the outside line.