The Renault e.dams driver started in fifth but, aided by a shrewd strategy, he rose to the head of the field ahead of Lucas di Grassi and Nick Heidfeld - a repeat of the podium from last season's first race.

It took half a dozen laps for Turvey's defences to be broken, with Sam Bird moving into second having passed DS Virgin Racing team-mate Jose Maria Lopez on the opening lap.

Bird made inroads into Piquet's lead over the next 10 laps or so, with Buemi moving up into third.

The race changed on lap 17, when Lopez - who had tumbled down the order after clashing with Bird on lap one - crashed into the barriers exiting the Turn 3/4 chicane.

Piquet was just behind Lopez on the road and nosed his car into the barriers in avoidance.

He was able to rejoin but fell to third as Lopez's submerged car prompted a safety car.

Turvey, Buemi, Heidfeld, Loic Duval, Nicolas Prost and Jerome d'Ambrosio then stopped on lap 21 - giving themselves several laps more to complete in their second cars than those who stayed out.

But with the safety car coming in the following lap, they would go on to gain track position and a huge time advantage when the rest stopped.

Buemi rejoined behind di Grassi but quickly passed the Brazilian, who was on an aggressive energy-saving strategy having pitted a few laps earlier. 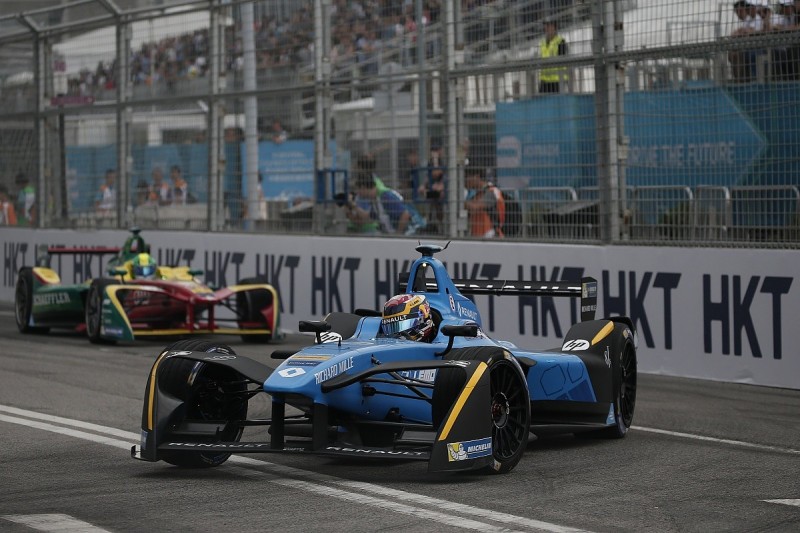 Di Grassi had already been in the pits prior to that, after breaking his front wing rear-ending Ma Qing Hua on the opening lap following a Turn-2 traffic jam, but the safety car launched him back into contention.

Piquet pitted as soon as the safety car came in but Antonio Felix da Costa and race leader Bird stayed out a little longer to laps 24 and 25 respectively.

Bird's race was ruined when his second car failed to launch, while da Costa fell to eighth and Piquet to ninth.

At the front, Buemi managed to eke his remaining energy out to end despite the additional problem of an overheating battery, with di Grassi a comfortable second.

Prost wound up fourth behind Heidfeld, while da Costa used his energy advantage from switching cars later to blast past Duval, d'Ambrosio and then Turvey for fifth in the closing laps.

The Dutchman crashed heavily in qualifying and his second car was only just rebuilt in time for the second half of the race.

By that point he had risen to the lower reaches of the top 10 and he then mirrored da Costa in picking off several drivers in the last 10 laps.

D'Ambrosio finished seventh having started 18th, while Turvey slumped to eighth and Piquet ended up behind the Venturi duo of debutant Maro Engel and Stephane Sarrazin.

Jaguar failed to score on its return to racing, with Adam Carroll best of the I-type 1s in 12th and Mitch Evans retiring.