Formula E has revealed the layouts it will use for its Berlin triple-header finale to the 2019/20 season, which will use the 'traditional' Tempelhof track, a reversed-version and an extended course

The final six races of the coronavirus-delayed campaign will take place as three double-headers on 5-6, 8-9 and 12-13 August.

The original track at the former airport was used in the championship's inaugural 2014/15 season and for its second race in Berlin the event took place in the Karl-Marx-Allee area of the city.

The 8-9 August races will use the layout used for the past three seasons, and the final two races will take place on an extended 1.55mi (2.505km) course.

"It is a huge undertaking in terms of production to set up three different configurations for this event, with fewer people on-site to be able to carry out those changes," said FE sporting director Frederic Espinos.

"We're doing something that has never been seen before in world-class motorsport and it's an example of how reactive and innovative Formula E is - it's in our DNA.

"Racing in both directions has a lot of implications. It is not just turning all braking markers and the grid boxes around. Other international series wanted to make this happen but their proposals were rejected by the governing body.

"We had to make sure all the broadcast technology, overlays, branding, safety measures, barriers, kerbs and run-off worked and plan accordingly for this - whilst also making the changes viable in just 24 hours, with reduced resources. 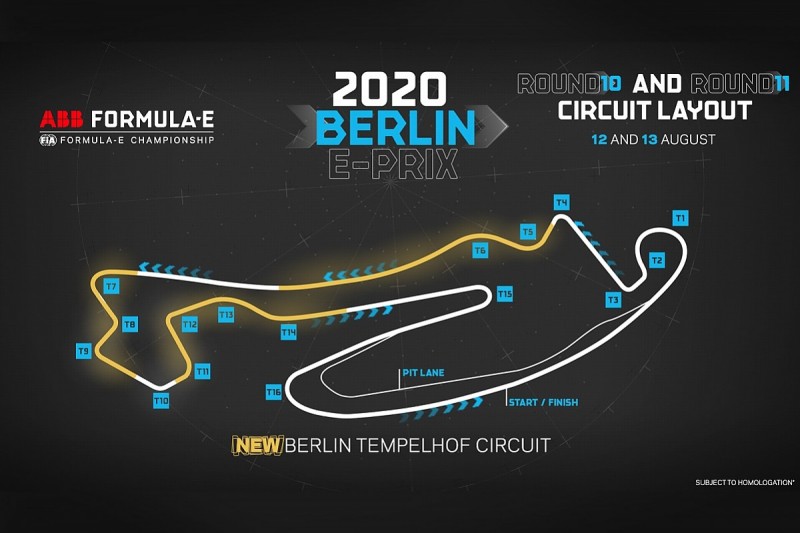 "The third track will be more technical, so totally different again in terms of energy management and what the teams might be used to or expecting.

"All along, we aimed to make their lives as tricky as possible in Berlin, limiting the effectiveness of their simulation work and throwing strategies up in the air. Car setups will all need to change, energy management and regen will be completely different and teams will have to think on their feet.

"There will be a lot for drivers and engineers to get on top of before we go green and I feel the Formula E spectacle fans are familiar with will be pushed a step further still with this additional bundle of unknowns."

Espinos also said a plan to reverse the Berlin course - given the title 'The NILREB project' - had been underway before the pandemic up-ended FE's plan 2019/20 championship, which is currently being led by DS Techeetah driver Antonio Felix da Costa.

"The FIA and the German motor racing authorities have supported us constructively all the way, allowing our experienced team of track engineers to make this happen and we are grateful for their support and co-operation," said Espinos.

"NILREB was in progress before the current situation. Our idea was to do one day clockwise, one day anticlockwise.

"We started to work on it at the turn of the year and set up a working group end of February.

"We were juggling some super good and cost-effective ideas. We were working on this idea prior to the current circumstances as we are always trying our hardest to surprise people and do something new and groundbreaking."