De Vries completed a race one clean sweep, topping both practice sessions, group qualifying and the superpole shootout as the new Mercedes car made a dominant competitive debut.

De Vries made a very clean getaway to convert his pole position into the lead on the approach to Turn 1 as he stretched out an immediate 1.2-second advantage.

His initial escape was aided by a poor start for second-starting Pascal Wehrlein. The Porsche driver then had to defend from Rast, which delayed the pair.

Although de Vries ran for much of the race with 1% less useable energy, he remained in control despite two safety car intervals.

A brief concern regarding overconsumption stopped de Vries from pulling completely clear, but he soon swapped mode to amend the issue and balance it out.

In that time, Rast made his move for second place. He passed Wehrlein around the outside on the approach to the Turn 18 chicane, which prompted Wehrlein to dive for his first use of the 235kW attack mode.

But the Audi driver never truly closed in on de Vries to threaten his lead and, after the two safety car interludes, the Dutch racer ran to victory by an emphatic 4.1s.

Fourth-starting Mortara used his attack mode to devastating effect, pulling an astonishing double pass on the Jaguar of Mitch Evans and then Wehrlein.

Having accessed the higher power mode, he easily outdragged Evans and then darted across his nose to weave through the shrinking gap between him and Wehrlein. 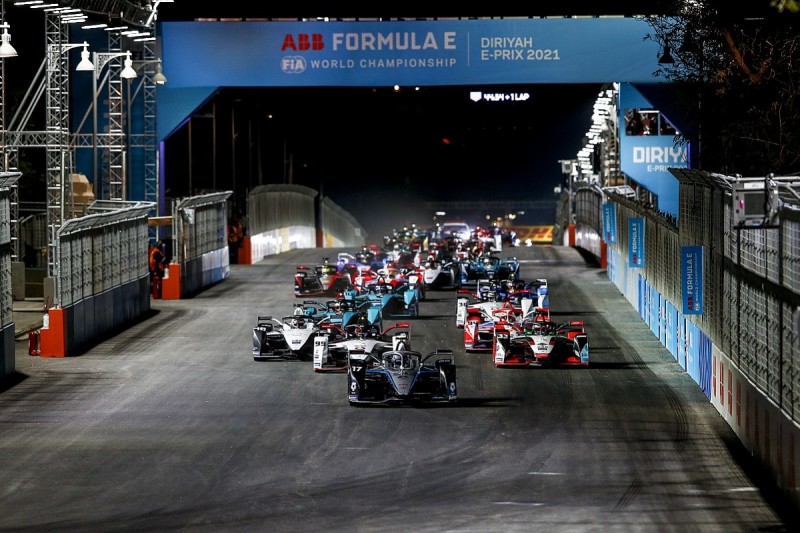 Mortara did drop back to third after Rast used his second attack mode, but a second safety car - called for Maximillian Guenther's heavy crash into the wall after clattering an apex barrier - nullified Rast's advantage almost immediately.

That allowed Mortara to take attack mode on the restart and pass the three-time DTM champion to score an impressive second-place finish.

Evans then managed to demote Rast a place further, as Wehrlein fell to a somewhat quiet fifth place.

The Nissan e.dams charge was headed by Oliver Rowland, a late climber thanks to BMW Andretti driver Guenther's shunt.

He also gained two positions from the collision between Sam Bird and Alex Lynn, who had been trading places for sixth.

But, as Bird lunged for the inside line, Lynn appeared to pull across the track to leave Bird with nowhere to go and they spun, ending up facing nose-to-nose.

Lynn would retire almost immediately with broken front-left suspension, and Bird continued for some time before pulling into the pits after reporting a strange noise from his car.

That all allowed a recovering Alexander Sims to lead the Mahindra Racing charge in seventh, as yet another fanboost reward gave second Mercedes driver Stoffel Vandoorne fastest lap and eighth place.

Lucas di Grassi completed the Audi line-up in ninth, as Oliver Turvey was a strong 10th for the improving NIO 333 team.

After a botched group one qualifying run, reigning champion Antonio Felix da Costa did well to progress form 18th to 11th, despite tangling with 13th-placed Sebastien Buemi over the line.

The pair were split by the BMW Andretti of rookie driver Jake Dennis, with fellow first-timers Norman Nato and Nick Cassidy in 14th and 19th.

Double champion DS Techeetah driver Jean-Eric Vergne ran to a tame 15th ahead of the second Porsche of Andre Lotterer.