McLaren-Honda Formula 1 protege Norris, who also topped both dry free practice sessions, was already over half a second to the good when he improved on the final lap by three tenths.

"Some corners are just so slippery and it's the same in the dry too, and it's really tricky to know what lines to take, but once I worked it out it went smoothly.

"I found the grip and the car was really good.

"The [last] lap wasn't perfect - I gained a lot in some corners but lost in others - but I managed to put it together." 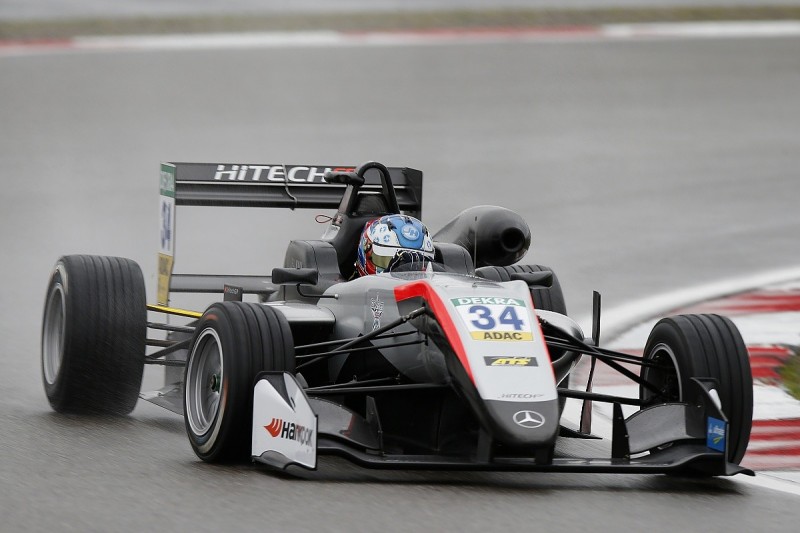 For his part, Hitech GP driver Hughes was happy with his second position, which was unchanged after a small last-lap improvement: "The car was mega to be honest.

"I lost overall grip with two or three laps to go, but I never would have had enough to go to pole position.

"I was fighting for track position, so I did a cool lap and improved on the last lap."

Up to third came Gunther's Prema Powerteam stablemate Callum Ilott, whose gearbox had lapsed into neutral.

"Luckily I managed to get it going again," he said, "and I got some space and popped it in.

"I was purple in sector two and sector three on the last lap, but in sector one I might as well go home - I'm 1.3 seconds slower in the wet!"

Formula Renault Eurocup leader Sacha Fenestraz made a hugely impressive F3 qualifying debut to take fourth in his Carlin car in a one-off race outing, the Frenchman following Norris for some time during the session.

Gunther shares the third row with Hitech's Ralf Aron, while Carlin driver Jehan Daruvala jumped up the order on the last lap to seventh, ahead of lead Van Amersfoort Racing contender Joey Mawson.

Nikita Mazepin and Tadasuke Makino made it all four Hitech cars in the top 10, with Makino having traded fastest times with Norris early in the session.

Motopark's qualifying woes continued with Joel Eriksson's diminishing title hopes taking another hit - the Swede comfortably emerged as the quickest of the team's quintet but qualified down in 12th.

That was one place behind the other impressive debutant, Max Defourny in 11th for VAR.

The final debutant, Petru Florescu, was 17th and the second best of the struggling Motopark cars, although the Romanian has clocked up €1200 of fines for being 15 minutes late for the drivers' briefing and speeding in the pits in free practice.