Although the Swede led from start to finish, it was a close race in fitting with Monza F3 tradition - with just four laps remaining he was leading a train of six cars and survived minor contact from Mikkel Jensen at the Roggia chicane, only to pull away again over the final stages to win by just over a second.

"That was one of my most important wins I think," said Rosenqvist. "After the first two laps I had a problem with the clutch; it was spinning more and more as I went up the gears and I lost of a lot of acceleration and top speed.

"But luckily they were fighting behind - that was key for me because I was losing six or seven tenths on the straights."

From pole, Rosenqvist's Prema Powerteam Dallara-Mercedes extended a small gap over the first half of the race from the Mucke Motorsport machine of Santino Ferrucci.

Ferrucci's Mucke team-mate Jensen wriggled free of an early battle with Prema pair Lance Stroll and Jake Dennis, and the Dane then passed Ferrucci with a textbook move on the brakes into the Rettifilo chicane on the ninth lap of 19.

Ferrucci subsequently came under attack from Dennis. The Brit was ahead as they entered the 13th lap, but Ferrucci attempted to repass under braking for Rettifilo, only to run into the back of Dennis, sending him wide and ending the American's race on the spot (pictured below). 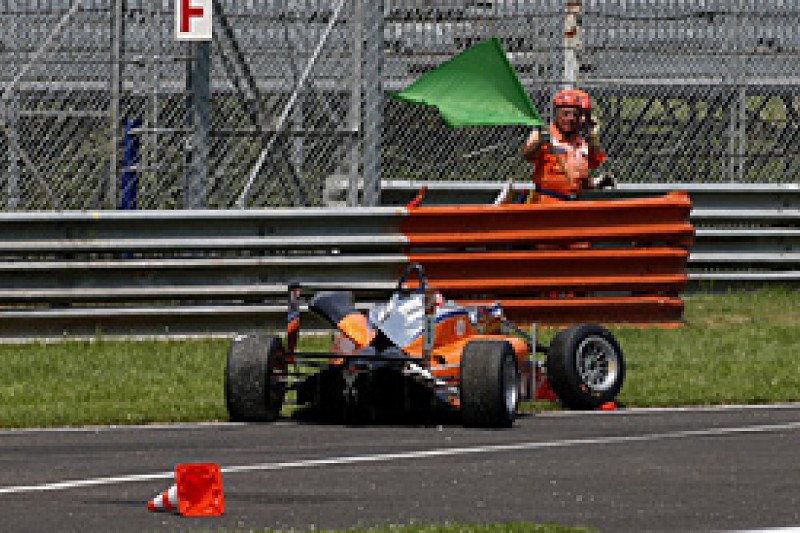 Meanwhile, Jensen was closing the gap to Rosenqvist, while Dennis, Stroll, Raoul Hyman and Charles Leclerc all closed up behind.

Although Dennis tried one move on Jensen, the top three then settled.

"It was battle on really," said Dennis, who started seventh due to a grid penalty. "I did some intense moves that were on the limit even for me, Santino hit the back of me, and Lance kept squeezing me off the track."

Hyman and Leclerc both got ahead of Stroll. Ferrari Driver Academy prospect Stroll then came under attack from Antonio Giovinazzi - the championship leader dived to the inside into the Rettifilo on the final lap, only for Stroll to close the door and get pitched into a spin.

Incredibly, Giovinazzi then passed Leclerc and Hyman over the course of the final lap to claim fourth.

George Russell had been embroiled in that scrap early on, but lost out late in the race to Pietro Fittipaldi, who finished seventh, while Brandon Maisano and Arjun Maini completed the points scorers.

Alexander Albon lost his third place on the grid when his car didn't get away on the green-flag lap, while there was one safety car early on caused by a collision between Artur Janosz and Markus Pommer on the grid, which required Janosz's car to be removed.