Maini seized the lead from polesitter Raoul Hyman at the start and was challenged by the equally fast-starting Boccolacci at the first turn.

But the Frenchman slid wide going around the outside of the corner and Maini was able to race clear in first place.

Boccolacci stayed in touch with the Jenzer Motorsports driver during the early stages and used his first of four DRS activations at the start of the fifth tour of the race's 17 laps.

The advantage from opening the rear wing allowed the rookie to close the gap to Maini and he attacked at the first corner on the following lap.

But Maini resisted around the outside of the right-hander and the two touched wheels going through the left of Turn 2, which cost Boccolacci momentum and exposed him to the advances of ART Grand Prix's Anthoine Hubert, who had dispatched Hyman on the previous lap.

That scrap gave Maini the chance to break free for good and he quickly moved clear, going on to claim his maiden GP3 win by 6-seconds at the flag. 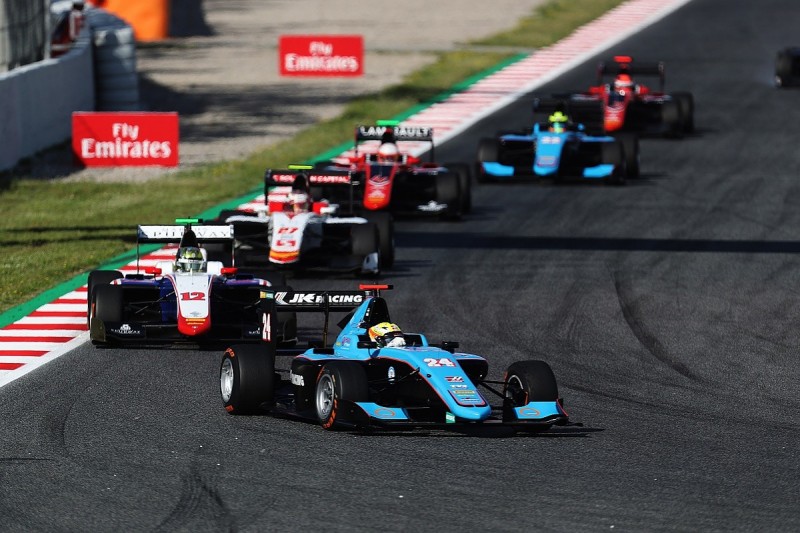 Boccolacci - now deprived of the use of DRS in attack and defence - held on to claim his first GP3 podium and finished 1s clear of Maini's Jenzer team-mate Alessio Lorandi, who claimed his second third place of the weekend after passing Hubert late on.

Mercedes F1 junior driver George Russell finished fifth after coming off best in a scrap with race one winner - and ART team-mate - Nirei Fukuzumi as they both tried to get past Hyman, who eventually finished seventh, in the closing stages.

Santino Ferrucci came home eighth for DAMS, ahead of Kevin Joerg, and Julien Falchero rounded out the top ten.

After being forced out of second place in race one when an sensor problem shutdown his engine, Jack Aitken had to start race two from 19th on the grid.

But the Briton was able to fight his way up to 13th place by flag to record his first finish of the season.

Leonardo Pulcini - who finished second in race one - ended up 17th after being shown the black-and-orange flag in the early laps, which meant the Italian rookie had to pit and allow his Arden mechanics to change his front wing.

Fukuzumi now leads the championship standings on 29 points, four clear of Lorandi and eight in front of Maini.