ART Grand Prix driver Ocon, whose only victory of the season came in the opening race of the year at Barcelona, had a six-point lead over rival Ghiotto coming into the decider.

The pair lined up alongside each other in fourth and fifth on the grid, after Ocon had his race one win taken away because of a five-second penalty for gaining an off-track advantage.

At the start Koiranen GP's Matt Parry appeared to go across Ocon, which forced the Frenchman to veer left where he made contact with rival Ghiotto.

They both escaped from the incident relatively unscathed, though, Ghiotto lost a piece of his front wing endplate and fell down to sixth.

Palou got away well from pole position, as did Ferrari junior Antonio Fuoco from second.

This was bad news for Ghiotto, who needed to outscore Ocon by six points to win the title.

It wasn't to be, despite the Italian making up his two lost places during a frenetic opening lap.

The Trident driver pushed Emil Bernstorff wide at the chicane before the long straight to take fifth, before demoting Parry, who was forced to pit with damage, under braking for Turn 11.

This put Ghiotto directly behind Ocon and it looked as though the Italian was going to mount an attack.

He stayed within a second of the ART driver but he was never really able to attempt an overtake and instead fell back into the clutches of Jimmy Eriksson.

Koiranen GP driver Eriksson hassled Ghiotto for several laps but he couldn't find an opening, as Ghiotto's Dallara simply rocketed away from the slower corners. 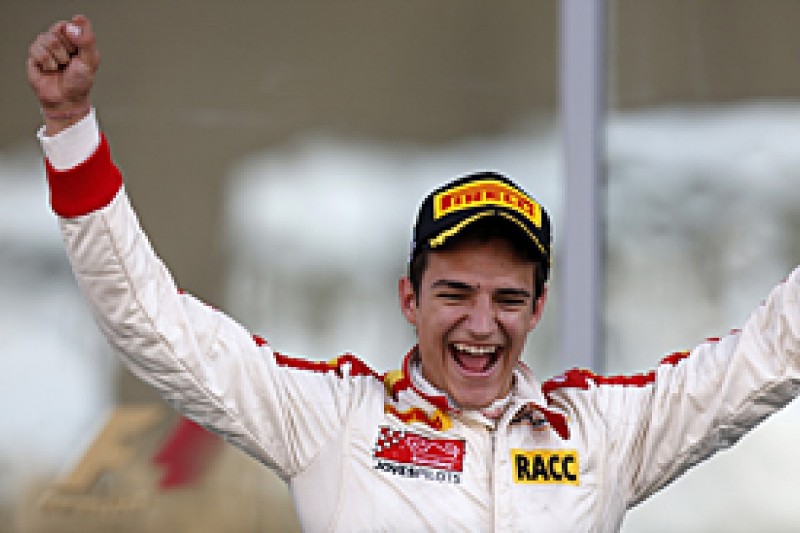 Out front Palou crossed the line to take his, and Campos Racing's, first win and podium of the year.

The Spaniard was never under any pressure from Fuoco, who claimed his second podium finish of the season in second in Carlin's final GP3 outing.

Ocon crossed the line in third to take his second consecutive single-seater title, after clinching the European Formula 3 championship in 2014.

A disheartened Ghiotto came home fourth, ahead of Eriksson and Bernstorff who fought hard over fifth in the closing stages.

Marvin Kirchhofer secured third in the championship with seventh, while Jenzer Motorsport's Pal Varhaug took the final point in eighth.

Status Grand Prix bowed out of GP3 with another point-less finish. The team ended the season last in the teams' championship, with Alex Fontana their highest points finisher overall with 16 points.