Envision Virgin Racing driver Sam Bird was fastest in practice for the Mexico City Formula E race, while Audi's Daniel Abt was flown to hospital after the first session.

Bird, who won the opening race of the 2019-20 season in Saudi Arabia, posted a benchmark time of 1m07.673s with three minutes to run in second practice.

He was best of a flurry of drivers who posted late 250kW full-power flying laps, leading the way over the DS Techeetah of Antonio Felix da Costa by 0.119 seconds.

At the halfway stage of the run Jaguar driver Mitch Evans went quickest on a 1m08.509s, although he remained under investigation for exceeding track limits at Turn 16.

He then improved late on by half a second to climb to an eventual third, but that included losing three tenths in the second sector.

The 2015-16 champion, Sebastien Buemi - yet to score a point this season - ran fourth ahead of Mercedes driver and points leader Stoffel Vandoorne.

Behind Robin Frijns was Andre Lotter and the Mahindra of Pascal Wehrlein. Both he and team-mate Jerome D'Ambrosio will start from the back of the grid after resorting to a third gearbox already this season.

The DS Techeetah pilot had set the fastest opening sector by four tenths, but lost that time again in the second part of the lap.

Santiago winner Maximilian Guenther was only 16th following a session in which he shunted into the barrier at Turn 9 after a big lock up under braking.

Edoardo Mortara was just 21st, having topped a shortened opening practice run with a 1m09.273s benchmark on a still-drying track after thunderstorms the previous night.

That gave the Venturi driver a 0.347s cushion over Wehrlein, who in turn out-paced D'Ambrosio and Felipe Massa. 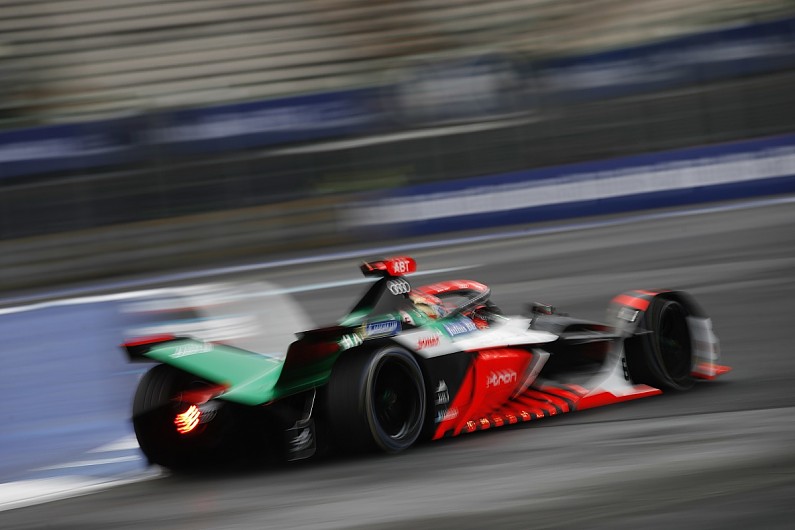 Abt brought out a red flag in the first free practice session when he shunted heavily with 12 minutes to go.

The Audi driver's car suffered a software error and he ploughed straight on at Turn 9 - where the circuit enters the stadium section after a long back straight - and wound up buried in the TecPro barrier.

After triggering a G-force meter for exceeding a reading of 16, Abt was taken to hospital by helicopter - due to distance rather than severity - for further examination as a precautionary measure.

The session did not resume owing to the lengthy repairs required.

That caused a subsequent 25-minute delay to the start of qualifying for the Jaguar I-PACE eTrophy support series, which was then abandoned altogether.

Abt was unable to take part in second practice; meanwhile his Audi team was constructing a new car around team-mate di Grassi's spare tub.

It has since confirmed that Abt will not take part in qualifying, though Audi is expecting him to be able to race.

Audi has come to Mexico without a reserve driver.