The Gen2 ABB FIA Formula E car is set to feature a front end designed to 'self-punish' drivers when it gets a "facelift" at the end of the 2019/20 season.

Autosport revealed that the Gen2 car, which was introduced ahead of the recently-concluded 2018/19 FE season, would be given an extended lifespan up to the end of the 2021/22 campaign.

As part of that plan, the car is set to be given an updated bodykit - in a similar move to FE adding a new nose shape and front wing design to the Gen1 machinery for its third season in 2016/17.

FIA circuit championships director Frederic Bertrand has now explained that the plan to change the look of the new car includes an intention to make the front end cause issues for drivers if they hit the rear of another car, but the aim is to do so without increasing safety concerns.

The opening races of the Gen2 era in 2018/19 featured a significant number of clashes between cars, with the FIA introducing 'yellow card' warnings for drivers as a result of the car being "very robust".

Porsche driver Andre Lotterer - who raced with DS Techeetah last season - called for the car to be made more fragile to encourage clean racing - citing the example of kart racing banning strengthened bumpers.

"We will launch a design - a facelift of the car - in season seven [2020/21] and this will also be thought [out] in a way that the front part will be a little bit weaker so that if the guys are touching there will be a self-punishment," Bertrand told Autosport.

"[But] you don't want to go too much backwards, so we need to find something balanced where we find a possibility that the car is a little bit weak in front, but not becoming too weak otherwise we will spend our time putting [out] yellow flags, or full course yellows, to recover the front noses, which would be a problem.

"This is exactly where we are right now - trying to redefine what could be a facelift, which would [cover] the second part of the life of the car.

"I don't know if weak is the right word - it's more that when you race in most single seater [series], if you push the guy in front you lose your nose and then you have to go back to the pits.

"If you maybe kill the race of the guy in front but you're also self-punished [is the intention].

"The difficulty we have right now is that guy in front is spoiled but the one behind is not and this is a big issue.

"But we'll do a car that is a little bit more self-punishing. Because fragile or weak is not the case because it will still be very strong." 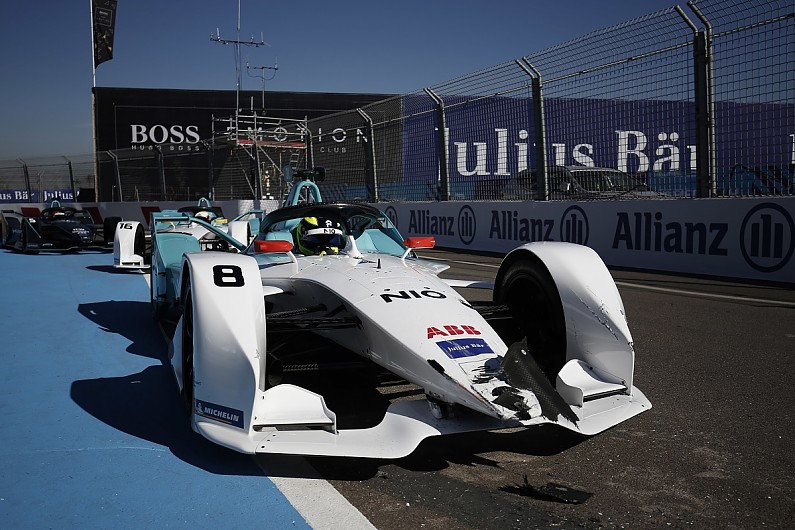 Autosport understands that the cosmetic change to the look of the Gen2 car is set to be a drastically different 'Gen2.5' design.

The changes are set to be significantly bigger than the additional front wing elements made to the Gen1 car after its first two seasons.

It is also understood that the potential change to the front end to make it 'self-punish' the drivers remains among a number of design options that are currently being evaluated by FE, the FIA and the teams.

It is stressed that the 'self-punish' move would not make the car less safe, but that damage would occur in such a way that drivers would be forced to pit for repairs, with the time loss acting as the punishment rather than poorer car performance, as is the case with damaged front wings in Formula 1 and other single seater categories.

An FE spokesperson told Autosport that work on the upgraded look of the Gen2 car is "still in the early stages".