ABB FIA Formula E increased security for this weekend's race in Paris as a result of recent disturbances in the city caused by the 'gilets jaunes' protest movement.

The gilets jaunes or 'yellow vests' movement began in November 2018 as a protest initially against the economic policies of French president Emmanuel Macron and has since become a wider crusade for economic justice in France.

Participants wear yellow high-visibility jackets, and another round of protests occurred in Paris one week before the FE race.

There have also been reports of extremist views from both sides of the political spectrum being aired during the gatherings.

With the FE race taking place in the heart of Paris - the Circuit des Invalides is just a few miles east of the Place de la Republique, where the protest on April 20 took place - the championship had to adjust its security measures.

In addition to FE's standard security protocols for city-centre events, Autosport understands that the championship worked closely with the Parisian authorities and had special measures in place to monitor potential flashpoints near the track.

Additional security personnel were engaged for this weekend's event and stricter search policies on arrival at the venue were enacted. 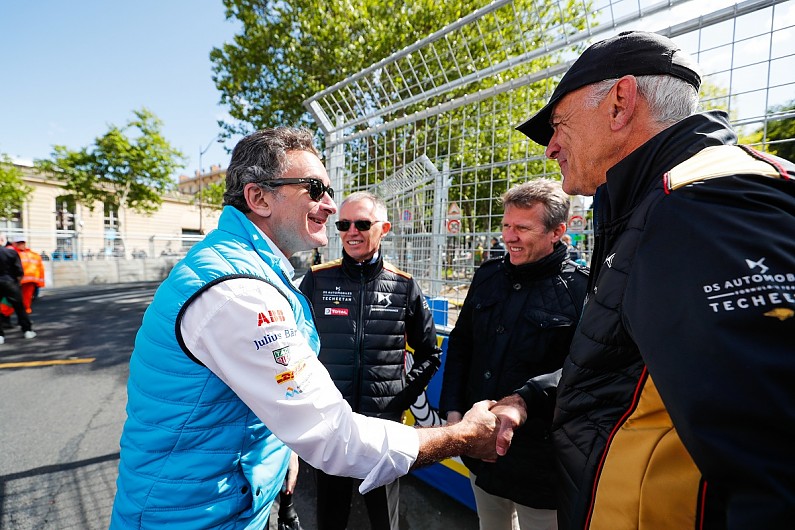 "Obviously we are careful with those situations," FE CEO and founder Alejandro Agag told Autosport.

"We increased the security and we [were] ready for if there is any kind of small disturbance or anything.

"But [we were] given assurances by everyone here that [was not] going to be a problem. But obviously we are always vigilant."

When asked what specific measures FE had taken on advice from the Parisian authorities, Agag replied: "More security, increased security. And we changed our staff gilet."

FE sends production and operations staff out to each venue well in advance of each race to operate the track and facilities construction, with these personnel usually wearing the traditional yellow high-vis jackets now associated with the gilets jaunes movement.

For the Paris race only, Agag explained that these staff, who are also required to take down the FE track and associated buildings, wore special blue high-vis kit instead.

"Everyone around building [the track] is in a yellow gilet - everyone in the world [working on building projects also does]," he said. "Except this race they are blue."

It is understood that no protests were attempted at the track on Saturday, where Envision Virgin Racing driver Robin Frijns scored a maiden category victory.