Logan Sargeant reclaimed the points lead of the FIA Formula 3 Championship with victory in the second race of the Spa-Francorchamps weekend.

Sargeant started Sunday's reverse-grid race from third place after falling to eighth place in the first race with engine issues that handed the points lead to his Prema team-mate Oscar Piastri.

19-year-old Sargeant immediately vaulted into second place on the run to Turn 1 when Red Bull junior Liam Lawson made a slow getaway from the front row and dropped down to fifth place.

He then challenged reversed-grid polesitter Richard Verschoor into Les Combes on the opening lap, but Sargeant was forced to run off the track and begrudgingly slotted in behind the 2019 Macau Grand Prix winner Verschoor.

On the third lap, American racer Sargeant eased past MP Motorsport's Verschoor on the exit of Raidillon and the Prema driver was almost already ahead by the time of the DRS activation line such was his speed advantage.

Sargeant's Prema team-mate Frederik Vesti followed him through with an overtake at the same place on the next lap to make it a 1-2 for the Italian junior single-seater behemoth.

Reigning Formula Regional European champion Vesti closed the gap to Sargeant from over two seconds to under one second of his team-mate but couldn't get close enough to make an overtaking attempt.

Sargeant held it together to pick up his second win of the season and the lead of the drivers' championship, while Vesti was forced to settle for second place to earn his first podium finish since claiming his maiden FIA F3 victory in Austria. 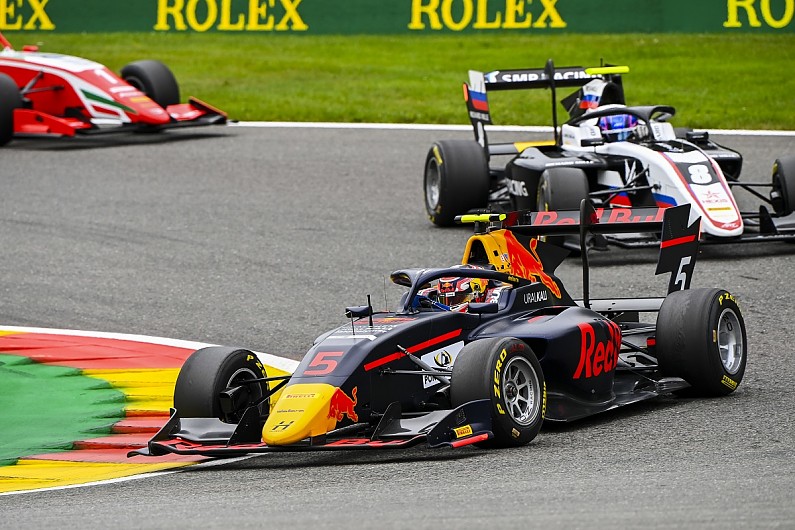 Hitech Grand Prix's Lawson recovered from his slow getaway to finish in third place after passing Theo Pourchaire with six laps to go.

Lawson passed Pourchaire into Les Combes, and Pourchaire's ART Grand Prix team-mate Alexander Smolyar was able to swoop around the outside of the Frenchman at the Rivage right-hander for fourth place just a few corners later.

Renault junior Piastri also passed Pourchaire to take the chequered flag in fifth place, but dropped to sixth after the stewards handed him a five-second penalty for an illegal overtake on Verschoor earlier in the race.

Ninth place went the way of Zendeli's Trident team-mate David Beckmann, who maintains his record as the only driver to score points in every race of the season.

The final point was earned by ART GP's Sebastian Fernandez, who ends a six-race pointless streak.