Nikita Mazepin charged from 14th on the grid to emerge victorious in an incident-filled Formula 2 feature race at Mugello as Mick Schumacher took the points lead.

A suspected mechanical issue for Ferrari junior Giuliano Alesi caused the Frenchman to pull his HWA Racelab-run machine to the side of the track.

This caused a virtual safety car, but this soon became a full safety car when the marshals were unable to extract Alesi's car without the use of a crane.

The race resumed with eight laps to go and Renault junior Lundgaard held his advantage over F2 veteran Luca Ghiotto as Dan Ticktum and Yuki Tsunoda jostled for the final place on the podium.

Red Bull and Honda protege Tsunoda attempted to dive down the inside of Ticktum at the opening corner but ended up clipping Ticktum after drifting wide.

Tsunoda picked up a five-second penalty while Ticktum, who labelled Tsunoda a "stupid little bloke" over the team radio, dropped to 10th place.

This was followed in quick succession by a three-car collision between Prema's Schumacher, Renault junior Guanyu Zhou and Campos Racing driver Jack Aitken.

Zhou was the leading driver on the faster soft-tyres prior to the restart but the collision ended his and Aitken's race.

Schumacher survived the contact and passed his Ferrari stablemate Callum Ilott for sixth place as the safety car was once again required to recover the stricken cars. 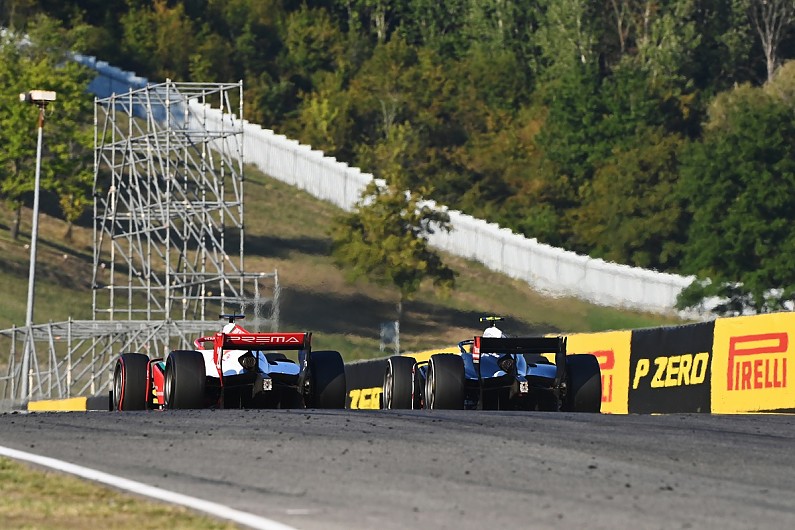 On the second restart with three laps to go, Mazepin used his tyre advantage to pass Lundgaard and Ghiotto in successive corners to hold the race lead on the exit of the Poggio Secco right-hander.

Mazepin stormed clear thereafter to claim his second feature race victory of the season, 4.4 seconds ahead of team-mate Ghiotto.

Haas F1 reserve driver Louis Deletraz earned his first feature race podium of the year for Charouz Racing System after overtaking MP Motorsport's Felipe Drugovich around the outside of Turn 1 on the final lap.

Drugovich was forced to settle for fourth place ahead of the new championship leader Schumacher - from 15th to fifth place - and Lundgaard, who faded to finish in sixth place.

Ninth place marked the first points since the second round of the season for Lundgaard's team-mate Marcus Armstrong while Jehan Daruvala earned the last point in 10th place.

Ilott recovered from his extra pitstop to finish in 12th, but out of the points.

Williams F1 reserve driver Aitken ran into the back of Ferrari junior Robert Shwartzman in the pitlane before the cars had even made it to the grid for the start of the race.

Prema's Shwartzman slowed to allow Lundgaard to leave his pit box but an unsighted Aitken drove into the back of Shwartzman. The incident will be investigated after the race.

Shwartzman struggled for pace in the early stages of the race with suspected diffuser damage before retiring from the race just past the halfway mark.