Red Bull and Honda protege Yuki Tsunoda claimed his second Formula 2 victory of the season in the Spa-Francorchamps feature race after Nikita Mazepin was handed a five-second penalty.

At the start of the race, Mazepin went side-by-side with polesitter Tsunoda into La Source, but the Hitech driver was left out wide, allowing Nobuharu Matsushita to come through to snatch second into Eau Rouge.

Matsushita continued to fall back down the order, before contact with MP Motorsport team-mate Felipe Drugovich put him out of the race.

Drugovich was heading into Blanchimont when he clipped the right-rear of Matsushita's car, causing a puncture and pitching the Japanese driver into a spin. Drugovich himself suffered damage to his front wing and had to head to the pits immediately, one lap before the pitstop window was due to open.

A virtual safety car was deployed for a lap, before the action resumed with Tsunoda leading by three seconds from Mazepin and Mick Schumacher, who had propelled himself to third after qualifying seventh on the grid.

Mazepin and Schumacher were the first of the frontrunners to stop on lap 10 of 25, with Tsunoda pitting a lap later to cover them off.

However, slow pit work on the right-rear tyre by Carlin left Tsunoda vulnerable, and he emerged out of the pits behind Mazepin, who assumed the effective race lead.

Tsunoda's deficit to Mazepin stood at the best part of four seconds after the stops, but the Red Bull and Honda junior managed to eat into the Hitech driver's advantage, bringing the gap under one second by the end of lap 18.

Tsunoda made two attempts at passing Mazepin on laps 20 and 24 heading into Les Combes, but Mazepin held his line, forcing the Carlin drive out wide and over the kerbs. 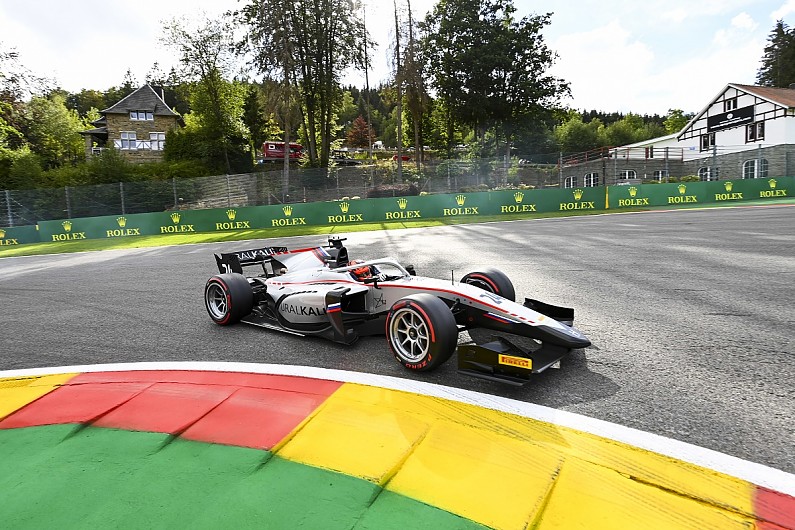 Tsunoda was close enough to attempt a similar move on the final lap but appeared to back out of it, giving Mazepin enough breathing space to cross the chequered flag with less than a second in hand.

However, on the slow down lap, stewards added five seconds to Mazezpin's race time for forcing Tsunoda off track during their second on-track battle at Les Combes on lap 24, handing the win to the Japanese driver.

Mazepin will be investigated for a separate incident for an unsafe release after the Russian driver ran close to the Trident mechanics as he drove out of hit pitbox on lap 10.

Meanwhile, Mick Schumacher lost several seconds in the pitstop due to a slow front-left tyre change, but the Prema driver held on to third to score his fifth podium of the year.

Louis Deletraz finished fourth for Charouz ahead of Prema's Robert Shwartzman, who had a lonely race en route to fifth.

Zhou had dropped to ninth after his late pitstop for soft tyres, having started on primes, but managed to carve his way up the field to finish seventh.