The session had to be halted with 21 minutes on board when Campos driver Guilherme Samaia stopped on track on the outside of Blanchimont with fumes spewing out of his car.

By that time only five drivers had set a competitive lap time under the two minute mark, with Trident's Marino Sato leading the charts with a time of 1m58.959s.

When the session resumed, Ilott went quickest with a time of 1m58.427s, before he was usurped by both Yuki Tsunoda and Mick Schumacher, with the Red Bull junior assuming the top spot from the Prema driver by 0.258s.

All drivers subsequently headed into the pits, before returning on track for their final runs in the last 10 mins.

Nikita Mazepin took advantage of fresh tyres to go to the top of the timesheets with a time of 1m57.721s, but Tsunoda managed to snatch the top spot back from the Hitech driver with a 1m57.593s flyer.

With two minutes remaining in the session, no driver could beat Tsunoda's benchmark, earning the Carlin driver his second pole position in his maiden F2 season.

Mazepin held on to his front row spot, 0.128s down on Tsunoda, while a late improvement from MP Motorsport's Nobuharu Matsushita propelled him to third place, ahead of championship protagonist Robert Shwartzman (Prema). 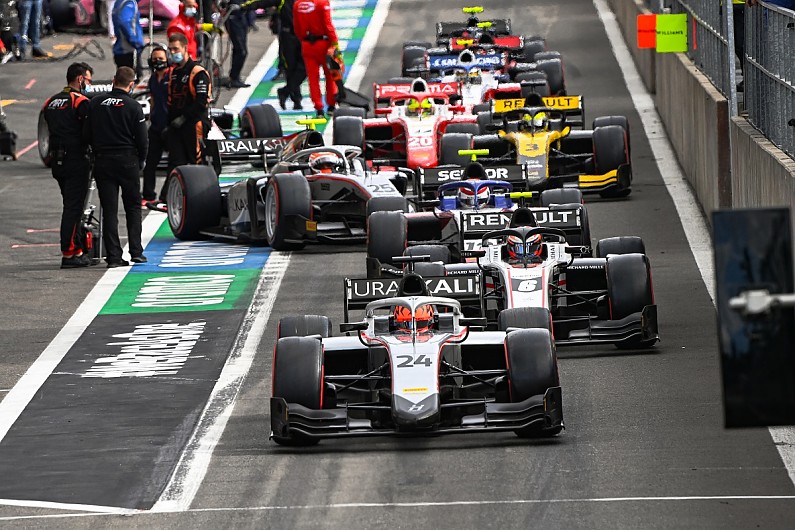 Matsushita's team-mate Felipe Drugovich leaped to fifth with a late flyer of his own, demoting Renault junior Guanyu Zhou (Virtuosi) down to sixth.

The top 10 was completed by the second Carlin of Jehan Daruvala and Hitech's Luca Ghiotto, the two drivers - who will share the fifth row on the grid - separated by 0.031s.

Championship leader Callum Ilott endured a difficult session as he could manage only the 12th quickest time in his Virtuosi, two spots ahead of DAMS' Dan Ticktum, who missed practice after an initial COVID-19 test returned an inconclusive result, before a subsequent check-up declared him fit to take part in qualifying.

ART's Christian Lundgaard had his fastest lap deleted for breaching track limits at Turn 9 and the Renault junior, who sits third in the drivers' standings', will start the race in 18th place, alongside Jack Aitken's Campos.

Red Bull junior Juri Vips will start his maiden F2 race from the back of the pack after his DAMS car stopped on track during his outlap.

Vips, who is replacing the injured Sean Gelael this weekend, had finished 17th quickest in practice on Friday afternoon, 1.3s slower than pacesetter Shwartzman.