Ilott, who won the opening race of the season at the Red Bull Ring, was sitting at the top of the times when qualifying was halted for the second time, with just over four minutes remaining on the clock. The session was not restarted.

Key to Ilott's achievement seemed to be the decision of Virtuosi Racing to keep its two cars out on track on their first sets of wet-weather Pirellis for a couple of laps longer than the opposition.

During that period, Ilott and team-mate Guanyu Zhou leapt from nowhere to first and third respectively.

Ilott and Zhou then filtered into the pits, and the field were just beginning to build up to push laps on their second sets of tyres when Jehan Daruvala spun off into the Turn 10 gravel, causing the red flag.

Up until Ilott's lap, which earns him four points to move him just a point adrift of the championship lead, it was Luca Ghiotto sitting at the top of the order with the new-to-F2 Hitech GP squad.

The Italian category veteran had problems in the pits as Hitech struggled to detach his right-rear wheel, but it mattered not as no one got a representative post-pitstop laptime in anyway, and Ghiotto - yet to score a point in 2020 - ended up 0.308 seconds adrift of Ilott. 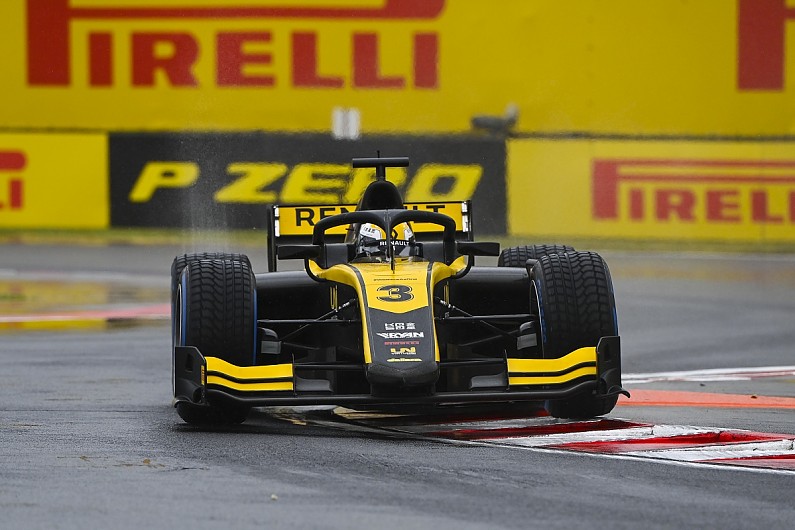 Renault F1 Junior Zhou remained third, and he will share the second row with Williams protege Dan Ticktum, who put in his most convincing F2 qualifying performance yet for DAMS and was second before the Virtuosi pair improved.

Mick Schumacher had gone quickest earlier in the session in his Prema Racing-run machine, his time standing despite running off the track at the Turn 13 left-hander, but he never improved on that and will start fifth.

In turn, Schumacher had displaced F2 rookie Christian Lundgaard from the top of the order - likewise, the ART Grand Prix-run Renault junior never improved and he will line up sixth.

Ferrari-backed Marcus Armstrong made it two ART drivers in a row in seventh, while Williams reserve Jack Aitken put his Campos Racing entry onto the other fourth-row slot.

Nikita Mazepin had set a quicker time than Aitken's, but the Hitech driver had that taken away for exceeding track limits, and his next best was good only for 16th.

Sean Gelael (DAMS) and Giuliano Alesi (HWA Racelab) completed the top 10, both edging out Prema's championship leader Robert Shwartzman, who has work to do from 11th on the grid.

The first of the red flags was caused by Guilherme Samaia within the first five minutes, when he spun off at the fast Turn 4 left-hander.