After making a poor start from pole position, as his anti-stall kicked in, Palmer watched Nasr, Stephane Richelmi (DAMS) and Fabio Leimer (Racing Engineering) jump ahead of him on the run to Turn 1.

ART's James Calado further demoted him, but Palmer managed to regain positions from Richelmi and Calado on a frantic opening lap to run third.

That set the tone for the race, as Palmer charged past Leimer for second at Turn 7 on lap four.

At this point Nasr was up the road by 5.2s, but Palmer cut that gap to 3.6s by the time Nasr stopped for fresh soft-compound rear tyres on lap 10.

Palmer stayed out longer, but haemorrhaged time to Nasr at this point, so when he stopped three laps later, he rejoined over 10s behind the Brazilian.

The gap between them went out to as much as 13.4s by lap 15, but Palmer then rattled in a sequence of fastest laps having sensibly nursed his fresh rear tyres in his early laps on them.

As the race entered its closing stages, it was clear that by stopping earlier Nasr was suffering with tyre degradation much more than Palmer. This was exacerbated by Nasr badly flatspotting his front-right tyre with seven laps to go.

After a thrilling chase, during which he was warned "your pace is too hot!" over the radio, Palmer caught and passed Nasr with three laps to go, using his superior traction along the Raffles Boulevard. Nasr tried to defend, but only succeeded in damaging his tyre even more with a massive lock-up into Turn 7.

Nasr trailed home over 13s behind Palmer at the finish, as he had to nurse his vibrating car home, admitting that "the front tyres were destroyed".

Calado gained positions in the pitstop cycle, and clung on to third place despite a late attack from points leader Leimer.

But Leimer lost his fourth place on the final lap, as Richelmi mugged him, even though they had pitted on the same lap and had the same tyre life. 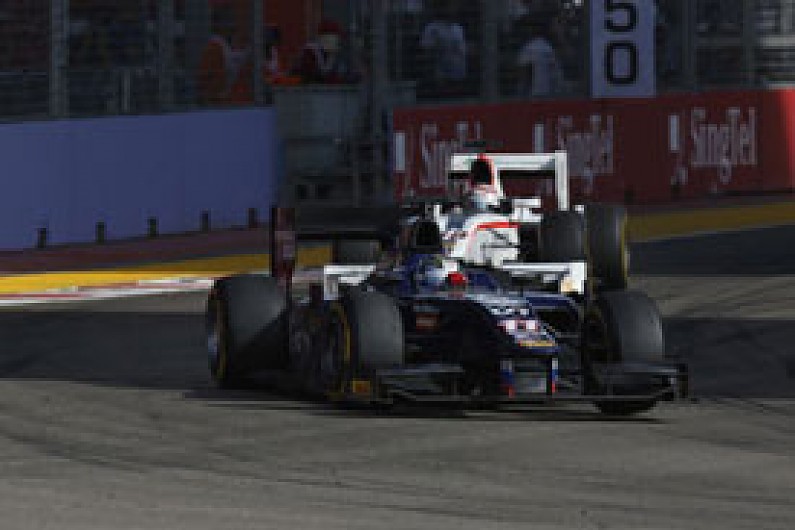 Leimer's title rival Sam Bird suffered a poor start and a slow pitstop, but battled back to take reversed-grid pole for Sunday's sprint race. The gap between them is now out to 12 points, with Nasr moving up to third in the title race.

Stefano Coletti again failed to score, and finished down in 12th.

Tom Dillmann and Marcus Ericsson finished ahead of Bird in sixth and seventh respectively, with Jon Lancaster and Dani Clos rounding out the point scorers.

With many drivers going for a soft/soft tyre strategy, Sunday's sprint race will mean they will have to re-use tyres.

Those who started on the super-soft, including Leimer and Bird, should have a big advantage as they will have fresh soft rubber all round.