Leclerc's fifth pole of the season and third in a row surprised himself and Mercedes' lead driver Lewis Hamilton, as Ferrari has struggled in high-downforce trim this year.

But ongoing aerodynamic development has brought extra performance to the car in Singapore, where Sebastian Vettel backed up team-mate Leclerc in third.

Mercedes team principal Wolff said: "When you look at Charles' lap, it was messy. A big moment at Turn 3. And another snap during the lap. So, it's just overall that the package is powerful.

"Then we've got to take ourselves by the nose and say 'did we do everything right?'. And certainly the answer is 'not completely'."

Ferrari's aero philosophy with its 2019 car meant it prioritised efficiency over peak downforce.

That made it a potent challenger at tracks including Bahrain and Canada, but it struggled massively at other circuits, such as France.

Leclerc scored back-to-back victories in Italy and Belgium but these were power-sensitive circuits and Ferrari was expected to slip back in Singapore, not lead the way again.

"I think you always need to have Ferrari on the radar," said Wolff. "They've had some pretty good races at the beginning of the season then it somehow fell apart, and a strong run most recently.

"When we came into this weekend I heard so many times 'you're the favourite, it's going to be between you and Red Bull and Ferrari's going to be nowhere because their car just goes fast on the straight'.

"I always say we try to be cautious about these things and here we go. "It's maybe an extravagant track and a little bit of an outlier and maybe they were lucky.

"But I don't think so. I think Ferrari is a force to be reckoned with, always." 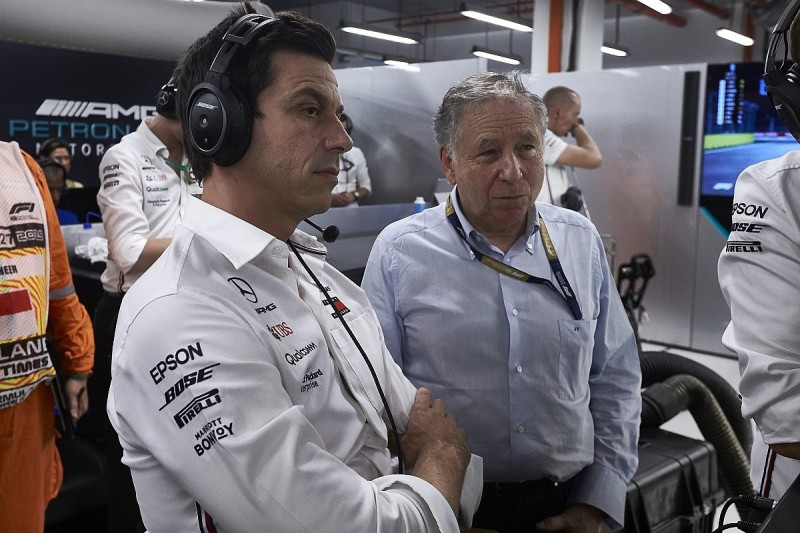 Wolff said Mercedes' limitations in qualifying related to "finding the sweet spot of the tyre", as Hamilton managed to split the Ferraris on his final run in qualifying but Valtteri Bottas only managed to qualify fifth.

"You can see throughout the weekend sometimes the drivers felt the grip level was good, and other times not," said Wolff. "I think when it mattered, we probably weren't in the best place.

"Singapore is special because you have the heat and you need a certain technique to balance the front and the rear axle in order to cross the line for your fast lap and have a balanced car.

"We've had very low days where we couldn't understand what needed to be done and then we had very good days like last year.

"Singapore always throws curveballs at you."