Watch: When Schumacher made amends on his real Group C debut

In the first of a series of free episodes from Motorsport.tv's Duke Classic archive, relive round five of the 1990 World Sports Car Championship at Dijon in which Michael Schumacher took a starring role on his first Group C start

Michael Schumacher's Formula 1 career had no shortage of controversy. From his title-deciding tangles with Damon Hill (1994) and Jacques Villeneuve (1997) to pioneering the 'swipe' tactic off the start-line and his 2006 Monaco qualifying fiasco, the seven-times world champion was an uncompromising and often divisive figure during his time at motorsport's highest echelon.

But a lesser-known chapter in the German's long career is his time in the World Sportscar Championship as part of the Mercedes junior team on the eve of his move to F1 which began, in typically contentious fashion - albeit not entirely of Schumacher's own doing - at Silverstone in 1990.

Along with 1989 German Formula 3 rivals Karl Wendlinger and Heinz-Harald Frentzen, Schumacher would be given select outings in the No. 2 Sauber-Mercedes C11 alongside veteran Jochen Mass, a one-time Grand Prix winner with McLaren in 1975 who would take on the role of mentor to the three young chargers.

Wendlinger was given the first two rounds at Suzuka - the last appearance for the outgoing Sauber-Mercedes C9 - and Monza, and performed capably as the No. 2 Mercedes dutifully followed home the lead car of Jean-Louis Schlesser and Mauro Baldi on both occasions.

Schumacher, whose main programme was an ultimately successful second crack at German F3, got his first chance for round three, but it all went awry during Saturday morning's untimed practice session when he stopped at Copse with a broken gear linkage. This began an unfortunate chain of events that would result in the car's exclusion from the meeting.

"Novice Michael Schumacher was at the wheel when the gearshift broke as he changed to fifth on the pit straight," reported Autosport's Adam Cooper on page four of the May 24 1990 issue. "He coasted to Copse in neutral and pulled onto the infield by the pit exit road.

"Team manager Max Welti and a group of mechanics ran the full length of the pitlane to reach the car. Schumacher got out, and eventually resumed having jammed the gearbox into third. He then drove back round the circuit, while the crewmen returned to the pits, one carrying the gear lever assembly.

"Shortly before the final official session, the FISA Stewards decreed that the team had broken Article 13 paragraph c of the WS-PC regs, which says that 'any repairs outside the pits must be carried out by the driver alone using any tools or parts carried in his car.'

"This is backed up by paragraph f, which confirms that 'with the exception of the driver... no one is authorized to touch a car which has stopped outside the pits'."

Despite the protestations of Welti and Mercedes motorsport boss Jochen Neerpasch that it was unclear where the pitlane stopped - claiming that marshals had pushed the car back "into what we thought was still the pitlane zone" - the original decision stood, and the car was thrown out, while Schumacher was individually excluded for not wearing his belts on his return lap, although this was disputed by Schumacher. 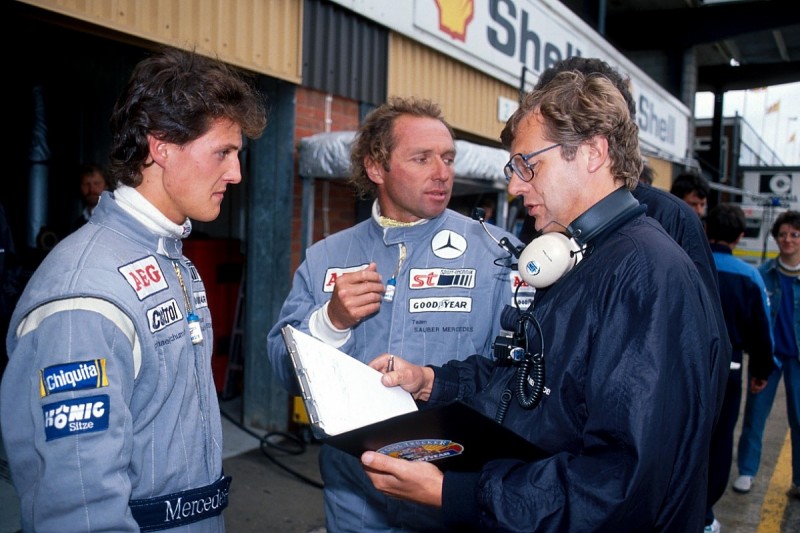 To make matters worse, the sole-remaining Mercedes of Schlesser and Baldi retired with a rare engine failure in the race, allowing Jaguar's Martin Brundle and Alain Ferte to score a popular victory on home turf.

Wendlinger then returned alongside Mass at Spa and rubbed salt into the wound with victory after the sister car had more engine problems, and with Mercedes not participating at the non-championship Le Mans 24 Hours, Schumacher would have to wait until late July for his next opportunity at Dijon, the scene of the Silver Arrows' only defeat in a dominant 1989 season.

But following a change of tyre supplier from Michelin rubber - which had worn much faster than the Goodyears on the Joest Porsche of Bob Wollek and Frank Jelinski - onto Goodyears, the Mercedes were expected to fare much more strongly over the 480km distance in 1990, and so it proved with Schlesser beating Brundle to pole and Mass close behind in third.

Mass elbowed past Brundle at the start and the two Mercedes began to pull away at the head of the field, Schlesser running a higher level of boost - and more fuel - in a bid to make a break. With everybody struggling to keep their tyres alive, Schlesser held on until lap 45 when he relinquished an 8s buffer to Mass and pitted for Baldi.

Mass waited another three laps before handing over to Schumacher, who as Cooper noted, "took a few laps to play himself in, but soon started going very quickly, matching and sometimes bettering Baldi's times". Baldi had extended his gap to 16s, using his new tyres to good effect, but was now nursing a handling problem.

In the fuel-limited Group C formula, Schumacher couldn't go all-out in his pursuit, knowing that it would be futile burning up precious litres trying to catch and pass the Italian if it meant Mass, taking over for the final stint, would have to severely drop his pace to make the finish.

Nevertheless, Cooper recorded that Schumacher "had done an excellent job in the second Merc" as he closed the gap to eight seconds while earning back three litres for Mass to use later. He led for three laps before his final stop on lap 89, leaving Mass to resume the chase. 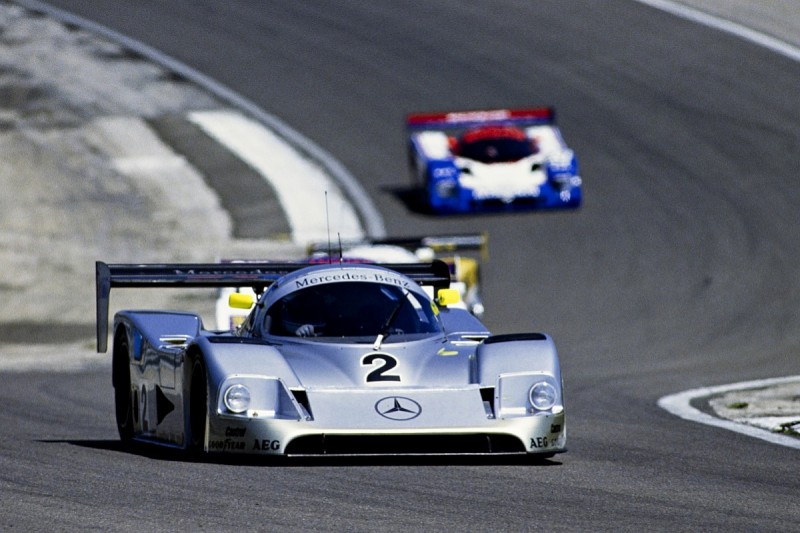 The all-German pair would fall short by 3.8s at the flag, but Schumacher's Silverstone nightmare was now forgotten. He went on to score his first win later that year in Mexico and would impress with fastest lap in his one and only appearance at Le Mans the following year, only for overheating problems to limit them to fifth at the finish.

The 1991 WSC was a disappointment for Mercedes as its new C291 was plagued by poor reliability and outshone by the Jaguar XJR-14 and Peugeot 905, but Schumacher and Wendlinger at least ended the year on a high with victory in Japan on Mercedes' sportscar swansong.

Of course by then, Schumacher had already set his stall as a future F1 superstar with an eye-catching debut at the Belgian GP that prompted Flavio Briatore to swoop. But that's another story... 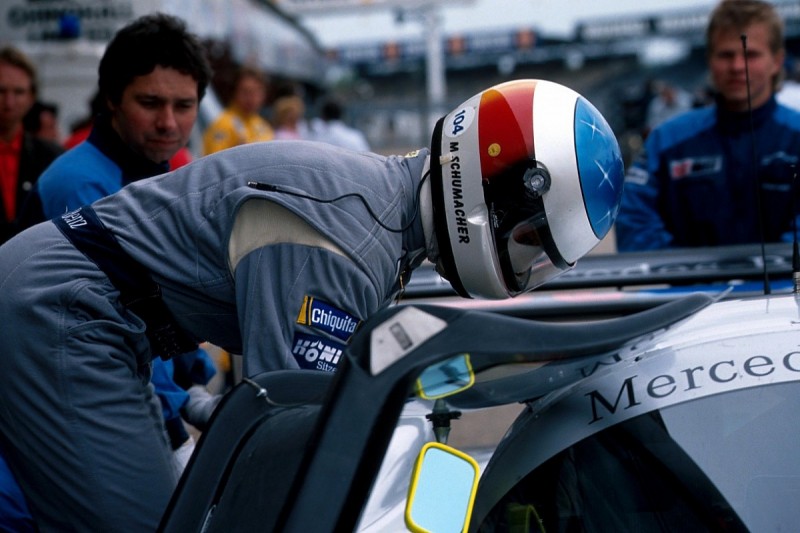 What really happens on an F1 pitwall