Sirotkin hit the Force India of Perez from behind under braking into Turn 2 on the opening lap, with the collision leading Perez to make contact with the Ferrari of Kimi Raikkonen.

While Perez recovered to third after a pitstop for repairs, Sirotkin's race lasted only until the following straight - where he was involved in a three-car collision with Fernando Alonso and Nico Hulkenberg and retired on the spot.

The stewards viewed video evidence during the race and gave Sirotkin a three-place grid penalty that he is set to serve at the Spanish GP.

Sirotkin was incredulous that he was not summoned to see the stewards before the punishment was decided, and said he initially thought the penalty had stemmed from the Alonso/Hulkenberg clash instead.

"I was not even asked," the Williams driver said.

"We saw replay hundreds of times and none of us probably find it obvious why.

"It is such a chaotic race, when so many crazy things are happening. It was a bit of contact, but it's racing and especially it's a first lap, it is a start of the race. 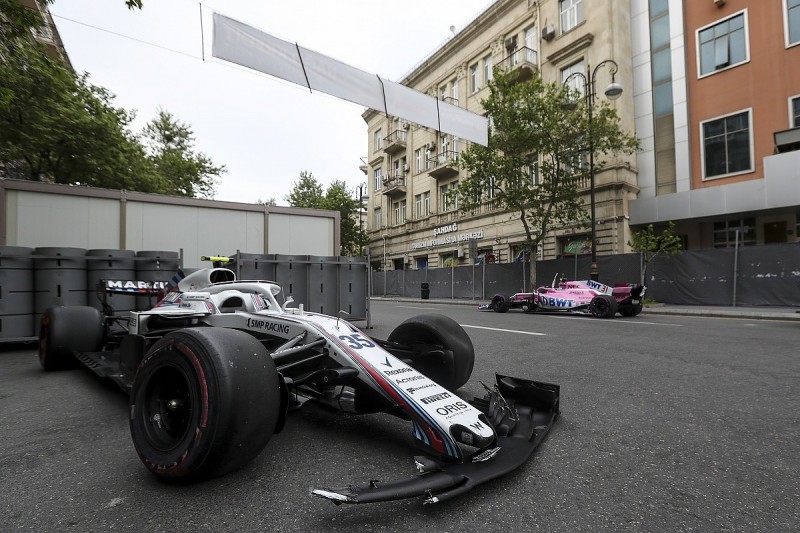 "No one asked. I did not get the point what [the penalty was] for.

"I was really sure it's for the contact afterwards, which would be in the same way also unfair, but to me it had much more something under it."

Sirotkin said his Williams was undamaged in the Perez clash, and reckoned the situation had played out "perfect" for him, as he looked to be fighting in the top 10 heading out of Turn 2.

"I checked when I got out of the car, I went to see my nose on purpose and it was zero, zero, zero [damage] on the nose," he said.

"It was exactly perfect [to] kind of maintain position, because in still-chaotic things like this, if you are not doing something, the people [are] doing something on you.

"Exiting Turn 2 I was really, like, wow, that was right on the limit, but it was perfect."

Sirotkin was adamant his move did not ruin Perez's race or damage the Force India, although the Mexican confirmed post-race that the resultant contact with Raikkonen broke his front wing and necessitated a pitstop.