The Singapore Grand Prix may have already become one of the most popular events of the season, but race officials say they are pushing hard to make it a 'must-have' part of the Formula 1 calendar in the next few years

F1's only proper night-race has proved a huge success since its inaugural event in 2008 - getting praise from the paddock, media drivers and fans who pack the Marina Bay circuit.

But rather than sit back and feel it has done enough to secure its future, race organisers say they are going to keep up their efforts to try and make the event even more successful.

The short-term ambition is for Singapore to have its race viewed as as essential to the calendar as traditional events like Monaco, Italy and Britain.

Michael Roche, the executive director of the Singapore Grand Prix, told AUTOSPORT in an exclusive interview at the Marina Bay circuit: "I want to see this race institutionalised - so that we are a Monaco, and an absolute must for Formula 1.

"We got very flattered in recent years when people used terms like 'a Jewel in the Crown' or the 'Monaco of the East' and things like that - but you cannot be complacent about it. You are only as good as yesterday gave you.

"It needs to get to a sustainable level, and you will never get it totally on autopilot, but does the government then want to lock down its city every single year?

Roche says that Singapore has no ambitions to try and take on the Monaco Grand Prix as a head-to-head for the best street race. Instead, he thinks it must continue to push on its own unique aspects if it is to achieve all that he hopes it can.

"A lot of people said, 'let's get all these yachts and we will have 200-300 yachts by the circuit.' Well, there aren't that many yachts in Singapore! You can't just copy something.

"If someone exactly copied us it wouldn't work because you have to go do it a little bit different."

Roche and his team have made a big effort to make the Singapore Grand Prix a total event - with music concerts, shows and displays a key factor of the entertainment package that makes up the weekend's offerings.

And he thinks it is the hard work they have made to keep the fans happy which has ensured that ticket sales have stayed at a high level - while other races have suffered a decline this year. 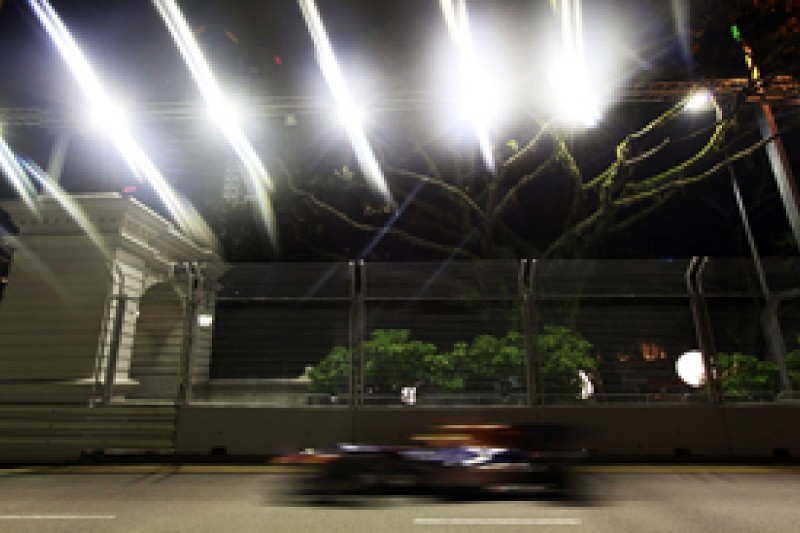 "It is not through ambivalence or that we wanted this feeling of: 'we are here, come and get us'," said Roche about why the Singapore Grand Prix had been a success. "We work extremely hard at it.

"Of course we made mistakes but it is remarkable how forgiving people are if they are having fun. You know if you have boys and girls, between seven and 70 years old, with smiles on their faces when they leave, then you have kind of done a good job I think.

Roche is also adamant that the financial investment Singapore makes to host the grand prix is well worth it - judging by the economic boost the city-state gets from the F1 weekend.

"Anything has it detractors, and people say it is a bit of a hindrance and this and that. But after we did that first year, you could have gone to any taxi driver and said, 'are you proud about this grand prix?' and he would have said yes. Everybody was proud. That was huge.

"The economic benefit of this race was undoubted, even from the amount of tickets we sell. Then there are the hotels, the restaurants and bars that are still busy at 5am in the morning.

"Then there are the shops. Prada and Dolce & Gabbana, the party type items, had nothing left on the shelves, they were wiped out. The GST [Goods and Services Tax] claims on Monday at the airport were unbelievable. So that is all fantastic.

"I remember a story from two years ago when the main brewery here, Asia-Pacific Breweries, had bars all over town calling them on Sunday lunchtime saying they need their night deliveries immediately. They were told, 'We've run out of beer!' I just thought, 'Yes, we've done it'."

He added: "We make the puzzle work. If you panic, and say we've got all these empty grandstands and you give away 50 percent of the tickets away, then nobody will come the next year. You are dead."

Roche has also confirmed that track changes are being considered for 2011 - but will only be implemented if they are guaranteed to help improve the racing.

"It is still in discussion," he said. "There is nothing inked or anything like that - but that is another part of the whole puzzle. Will it be more interesting for the spectator? Will it be a better race because of it? And that will always be an ongoing discussion.

"But would we pick the track up and take it to a far and distant place? I don't think that is the intention at all. It is working within what we have got, and there are limitations because of the buildings.

"My point is that if the FIA says if you do this and this and this you will get lots of overtaking then it sounds good. But with the technology of the cars, with the braking being so late, will it definitely do it [improve overtaking]? Those are things that are in discussions with the technical people, and Charlie [Whiting]."

Q & A with Lucas di Grassi

Heidfeld says his future is open