Vettel's fastest time was three tenths quicker than Raikkonen and over half a second faster than Lewis Hamilton and Valtteri Bottas.

The Red Bulls of Daniel Ricciardo and Max Verstappen ended the session fifth and sixth, over a second off the ultimate pace.

As with Friday's practice one, which also began in daylight, many teams waited until a quarter of the session elapsed before heading trackwards.

Heavy cloud cover made for less comparable conditions, and lower track temperatures than this time on Friday - 36C as opposed to 43C - while the ambient temperature was 30C.

Vettel went to the top of the timesheets with a 1m40.008s on a set of new hypersofts early in the session, but after a second run on the same set was less profitable he fitted new tyres and set a new benchmark of 1m38.054s - 0.6s faster than Raikkonen's best from Friday - with 25 minutes of the session to run.

Mercedes appeared to be continuing to evaluate a one-stop strategy as both Bottas and Hamilton embarked on long runs early in the session. But while Bottas completed an eight-lap stint, with a best time of 1m41.292s, Hamilton returned to the garage after six tours and a best of 1m42.507s.

Apart from installation laps, Verstappen did not emerge until the halfway mark but he was quicker than the Mercedes on soft tyre, setting a 1m40.826s while complaining that his engine was making a disconcerting array of noises. The team suspected a software problem. 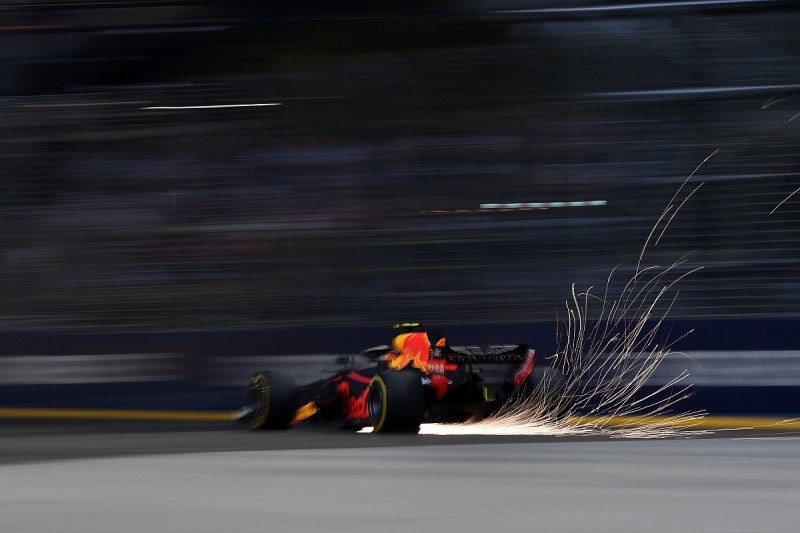 When the Mercedes embarked on their qualifying simulations on new hypersofts Hamilton posted a 1m38.738s, fastest of all in the middle sector but half a second off Vettel in the first.

Bottas crossed the line in 1m38.779s despite being fastest in the final sector, though he subsequently improved to a 1m38.603s.

If Hamilton had left anything on the table in sector one he did his best to locate it on a second run on the same set of hypersofts, this time clocking up a 1m38.558s, but it was still not good enough to get within a net half-second of Vettel.

Hamilton, though, may be able to draw succour from the fact that while he was able to extract a second flying lap from his hypersofts, Vettel dropped off badly when attempting another push.

Ricciardo and Verstappen made their qualifying simulations when the track was thick was traffic, and even with the hypersofts could manage no better than 1m39.186s and 1m39.265s, over a second off Vettel's session-topping time. Verstappen was particularly vociferous in complaining about his Renault engine.

Romain Grosjean was the best of the rest for Haas, seventh overall but 1.693s off the leader, followed by Esteban Ocon and Sergio Perez in the Force Indias, though that team faces investigation for a potential unsafe release of Ocon.

Fernando Alonso was 10th, and might have gone faster but elected to bail out of his final qualifying simulation, declaring that the amount of traffic on track made it "like a jungle".

Formula 1 2021 cars 'will look nothing like' concepts - Force India