The Briton was one of several drivers who opted to pit under the safety car just before mid-distance, rising to third when the frontrunners belatedly made their pitstops.

Despite his best efforts to fend off Kimi Raikkonen - who pitted for medium compound tyres at the same time as the McLaren driver - Button eventually succumbed to the Lotus with seven laps remaining and tumbled to seventh in the final few laps.

Button reckons that although the Finn - who went on to complete the podium alongside race-winner Sebastian Vettel and Fernando Alonso - was able to pull off a 35-lap stint on the medium compound Pirellis, McLaren's performance deficit means the rostrum finish was always unlikely.

"It's amazing how close you think you are to the podium but we were so far from it today," he conceded. "It was good fun trying, and we've got to take those sort of risks if we're going to get on the podium this year.

"We took a punt - I'm not sure how we thought we were going to do 35 laps on a set of tyres. How Kimi did that I really don't know.

"I didn't want to let him past. Maybe the best thing to do would have been to let him go, but how do you that? That's just not racing.

"We wouldn't have done any better if I'd done anything differently against Kimi, or had we changed the strategy in any way." 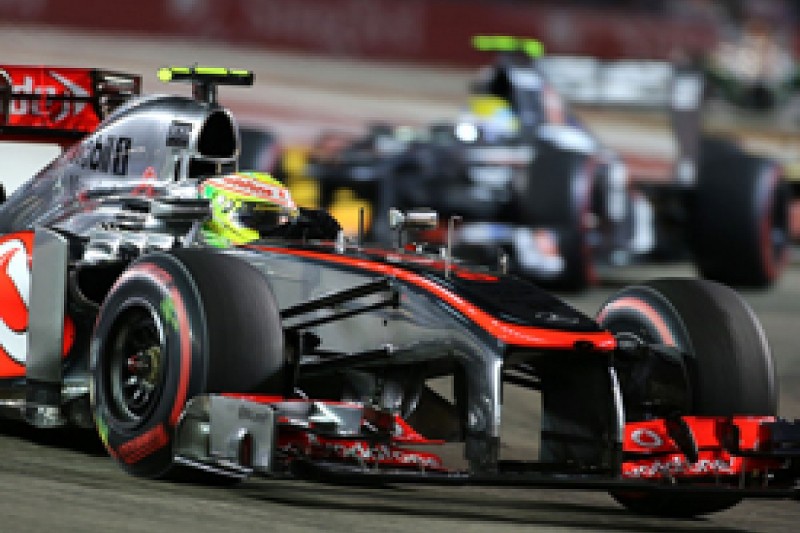 His McLaren team-mate Sergio Perez was equally philosophical about his own slide down the order, dropping from fifth to eighth in the latter stages of the race.

Having dealt with speculation surrounding his future with the team throughout the Singapore weekend, the Mexican believes he did the best job he could in the race.

"I think we can be very happy with the performance," he said. "I think it was the best result we could get.

"It was a difficult strategy, the safety car came out at the wrong time for us. It meant we had to risk everything to get to the end."