Vettel's best time of 1m29.166s was set shortly after a red-flag period that was caused when Toro Rosso driver Sainz suffered a violent crash around 50 minutes into the session.

Sainz, who is already set to start from the back of the grid at Suzuka due to engine component change penalties, suddenly lost control as he ran wide exiting the hairpin, and speared towards the tyre barriers, blocking the track. 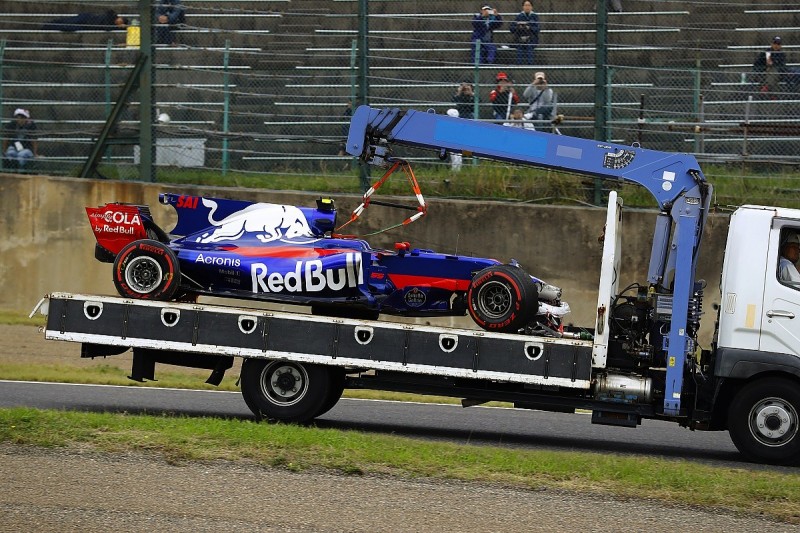 When the session resumed with 23 minutes left on the clock, Ferrari sent both its drivers out on super-soft tyres, with Vettel - who had been 0.042 seconds behind super-soft-shod Hamilton in second when still on softs - eclipsing the Mercedes' previous benchmark by 0.211s to move to the top of the times.

The arrival of heavier rain in the final 10 minutes ensured Vettel's time would go unchallenged in the closing stages.

Hamilton, using the new Mercedes aero parts he eschewed last weekend in Malaysia, set the pace for much of the session, trading fastest times with team-mate Valtteri Bottas during the opening 20 minutes on soft tyres.

Red Bull's Daniel Ricciardo became the first driver to dip beneath the 1m30s barrier just shy of half an hour into the session, using super-softs to set a 1m29.541s and eclipse Hamilton by 0.501s.

That benchmark stood for a little under 10 minutes, as Hamilton - now on super-softs - improved to a 1m29.377s to retake top spot.

That time held up for second after Vettel's late improvement.

Ricciardo ended the session third-fastest, 0.375s shy of Vettel and a tenth up on the second Ferrari of Kimi Raikkonen, who was 0.472s slower than his team-mate on super-softs.

Bottas was fifth, 0.985s off the pace, six tenths ahead of Max Verstappen in the second Red Bull.

Both drivers suffered lurid off-track moments during the session, Bottas approaching Turn 1 and then at Degner; Verstappen at Spoon.

Esteban Ocon was the best of the Force Indias in seventh, ahead of Nico Hulkenberg's Renault, Romain Grosjean's Haas and Stoffel Vandoorne's McLaren.

Fernando Alonso was 12th-fastest, 0.033s down on Vandoorne, the two McLarens split by Kevin Magnussen - recovering from a water pressure problem that kept him in the garage for much of the first part of the session.

Sainz ended up 17th after his crash, one place ahead of team-mate Pierre Gasly, whose Toro Rosso was sent out equipped with a halo at the start of the session.