Hulkenberg won F1's 'Class B' fight last season, finishing seventh in the championship behind the drivers at Mercedes, Ferrari and Red Bull.

But joining Renault in 2017 to spearhead its works team effort represented a longer-term project as the French manufacturer is a recent re-addition to the grid.

That means Hulkenberg is still searching for his first podium, holding an F1 record of 156 grand prix starts without a top-three finish.

Sainz, who partnered Hulkenberg for the final four races of 2017 and all of '18, said: "The year that I came to Renault, Nico was having already a very strong year.

"I saw him performing at the highest level I've seen I think [anyone] perform in the midfield for years.

"For me he's one of those guys that you give him a Mercedes, Ferrari or Red Bull he'd win races straight away.

"But unfortunately you guys are not able to see it, not able to calculate it, as Formula 1 works like that.

"Nico is one of those guys that I've learned a lot from and I'm going to go to McLaren with that experience, having shared a team with one of the most talented drivers in the grid right now."

Hulkenberg will need Renault to make a significant step to end his podium drought this season, having trailed the big three teams by a considerable margin.

Renault has openly admitted its disappointment at the size of that margin last year, but Sainz reckons the team he leaves behind is well placed to progress.

"I hope so because then it means they are also improving the engine and the engine goes to McLaren and the McLaren also starts working," Sainz joked.

"I see a lot of good guys here, I've met people like [chassis technical director] Nick Chester that are top guys, and people really willing to make it back to winning ways.

"I wish them the best. I know it's a hard process. I don't know how much time they want to cut it back, but it's between one-and-a-half and two seconds in qualifying every time." 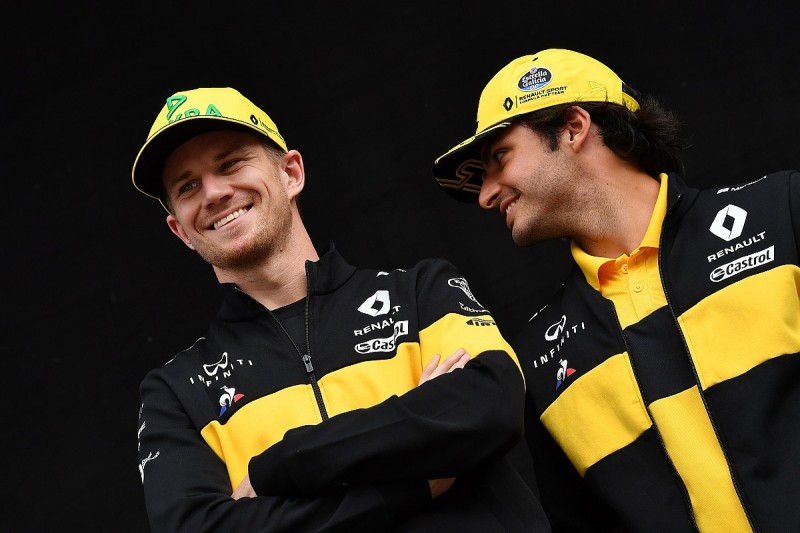 Sainz ended last season 16 points behind Hulkenberg, winning Class B just once all season as his team-mate managed that feat at six races.

While he rates his team-mate highly, Sainz believes the final table was misleading.

"I'm not entirely happy [with] the amount of points I got in my good weekends," he said.

Williams: Hamilton exposure will be 'extremely valuable' for Russell