Sainz had qualified 13th after McLaren's gamble to use the intermediate tyre in Q2 didn't pay off, with team-mate Lando Norris also missing the cut for Q3 in 11th position.

However the Spaniard is set to start the race from 16th position having held up Perez in Q2 when he rejoined the track after swapping his intermediates for extreme wets.

In a bulletin detailing the penalty, the stewards noted: "Car 55 [Sainz] was exiting the pits as Car 11 [Perez] passed through Turn 1.

"Car 11 caught up to Car 55 in Turn 2/3 and was unnecessarily impeded by Car 55 at that point and through several subsequent turns.

"While extraordinary track conditions clearly impacted the situation, radio communications from the team clearly warned Car 55 that Car 11 was behind him."

Racing Point driver Perez narrowly squeezed through Q2 in ninth position before setting the third-quickest time in Q3, as one of few drivers to select intermediates from the outset.

Speaking to Movistar before the ruling, Sainz said that he had hoped the stewards would take the poor visibility into account. 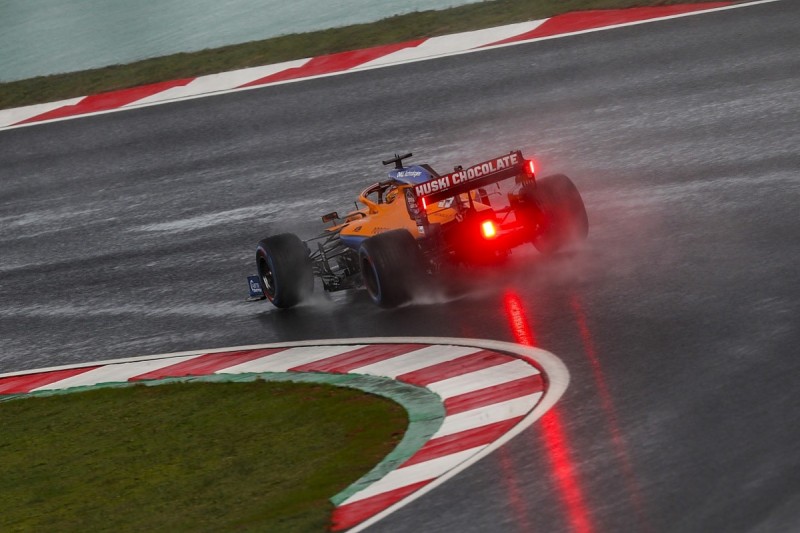 "I cannot see, you try to leave the pits and warm up tyres and I hope that the stewards take all this into account," he said.

The Spaniard, who was third in F1's last wet qualifying session for the Styrian GP in July, explained that the car felt much better after switching intermediates for extreme wets, but wasn't able to bring the tyre up to sufficient temperature to improve on his earlier time.

"We spent the whole qualifying trying to figure out which tire was the right one," he said.

"In the end, I realised in the middle of the session that we had made a mistake with the intermediate and when I put the extreme I went much better, but I could not improve.

"If we could have done a third lap, I would have gone much faster. But well, that's what it is.

"We had not been able to warm up the tyre as much as we would have liked."

Sainz added that McLaren had "expected" to struggle in qualifying when conditions deteriorated on Saturday and said he hoped that conditions would improve tomorrow.

"We expected that in rain it would be complicated," he said.

"We expected this negative result after FP3 so we have to see tomorrow if it is dry and we can recover a little."