Regular Williams driver Russell will race for Mercedes in this weekend's Sakhir Grand Prix after seven-time world champion Lewis Hamilton was ruled out by a positive test for COVID-19.

Russell underwent a seat fitting in the Mercedes W11 on Wednesday to get used to the cockpit, but soon found that it was tighter than his regular surroundings at Williams.

At 6' 1", Russell is more than four inches taller than Hamilton, making for a cosier fit upon getting into the car for the first time.

To curb this, Russell revealed he is using size 10 race boots this weekend instead of his usual size 11s. Hamilton usually races with size 9 boots.

"It definitely was a tight squeeze," Russell said. "My size 11 feet were a struggle, so I'm having to wear a size smaller shoe than would be ideal.

"So that's slightly uncomfortable. But I'm sure I can endure the pain to get this opportunity."

Russell revealed that his race engineer for the weekend, Pete Bonnington, had joked they would be able to make some changes to his body so he could fit.

"I spoke with Bono, he said: 'I'm sure we can make some mods to your body!'" said Russell. 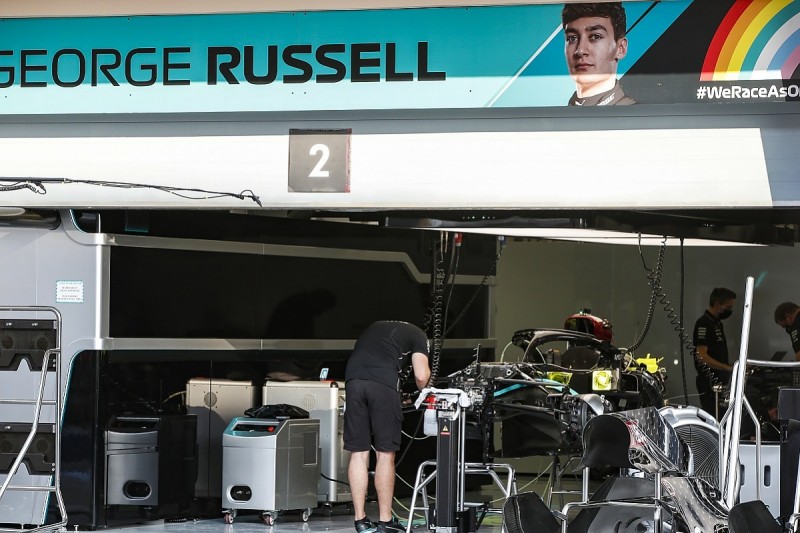 Russell's shock opportunity with Mercedes comes close to four years since he joined its young driver programme, making him the first graduate to its works team.

It also comes just over a month since there were doubts Russell would be on the grid at all in 2021 amid speculation he could be replaced at Williams by Sergio Perez.

But Russell knocked back a suggestion it was a "fairytale" opportunity, but merely another twist in a dramatic 2020.

"This is not the way I envisioned my first opportunity in a Mercedes race car," Russell said.

"Obviously, incredibly odd circumstances. This year has just been mental on all accounts, not just for me. There are much greater problems going on in the world.

"But just from a personal perspective in terms of my career it's been up, down, left, right, centre and it's just another twist to a tale, let's say.

"It still seems a bit surreal, and I'm sure in years to come I'll look back on 2020 and say 'what an unbelievable year'."