Sainz logged 151 laps during the first week of testing, which was disrupted by rain and snow.

Though already convinced of the 2018 Renault's "very big potential", he admitted he was a long way from working on getting the car to his liking.

"I haven't tested yet," Sainz said.

"I have run but I haven't really started testing the car, setting it up for my liking, going in one direction, the other.

"I haven't felt fully at home yet in the car but that's why I think we have still very big potential ahead of us.

"If we start doing things properly and we start testing and we start going in the right direction, I have still big margins of improvement to be more comfortable in the car."

Sainz's best lap of the week - 1.6 seconds off pacesetter Lewis Hamilton - came on medium tyres, and he took encouragement from how the new car behaved on the compound. 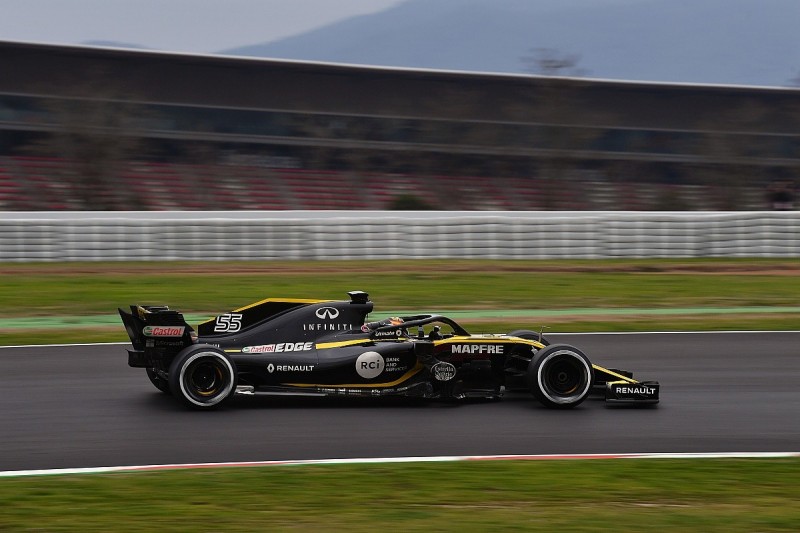 "To get the medium to work is a positive sign, there's not many teams out there who are really running the medium, and we managed to switch on the medium and do a good long run on it," said Sainz.

"Balance-wise, still not there, still we have huge margins of improvement, so I'm going to be patient, wait for next week."

Sainz said he felt settled in at Renault - having joined from Toro Rosso late last season - but stressed the importance of getting more testing miles under his belt and setting up the RS18 to his liking in time for the season-opening Australian Grand Prix.

"The last four races last year helped to get to know everyone [at Renault] and to give my feedback regarding last year's car," he said.

"And now I just need testing, because racing is not the same as testing. Actually, my father always told me that where you win the races is in testing.

"And I hadn't had the chance yet to really test the car, follow different directions.

"Normally Melbourne has been a good race for me - I think because I've come up from the last day of testing with a good baseline on the car that gives me confidence and I managed to attack the streets of Melbourne how I like.

"It's not an easy track to go there for the first time in a year, you need really big confidence with the car."

He is still optimistic that he can be properly prepared for Melbourne if next week runs smoothly.

"If we have a clean week, I have time to do some maybe shorter runs and go through more tyres and just go in different directions," Sainz added.

"I think I have time, but then we will need a clean week."