British Formula 1 racer Tony Brooks has passed away at the age of 90. He picked out the 1958 German Grand Prix as his best race, which was discussed by Autosport as part of its Race of My Life podcast series in 2020

The previous year the Vanwall had been diabolical at the Nurburgring, with no real suspension on what was a very rough circuit. By 1958, however, the team had learned its lessons well and in practice I was just one second slower than Mike Hawthorn in his Ferrari, with a time of 9m15s, whereas in 1957 I could only manage 9m36.1s.

I always thought the 'Ring was the greatest circuit and even to do well there gave me more pleasure than winning on some others. I was confident of doing well in the race but, although I was four seconds faster [4.9s - ed] than Stirling Moss in practice, I was not there to try and beat him unless, for some reason, he was unable to go fast enough to win.

This may sound odd today, but I had been brought up to believe in team sports at school. As I was number two to Moss he was entitled to the best car and my job was to back him up and try to win if he was unable to.

Stirling always liked to go like a bat out of hell from the drop of the flag, to try and demoralise the opposition. I had quite the opposite approach, which was to sit back for a while, see what happened to the opposition and then make a move. On this occasion I had no option and lost touch with the leaders because my Vanwall handled like a pig on full tanks.

I had not been allowed to practice with the car in this condition and to make the necessary suspension adjustments. Team manager David Yorke would never allow me to do many laps in practice because whenever I went faster than Stirling, he would feel obliged as number one driver to try and beat my time, which put wear and tear on the car. 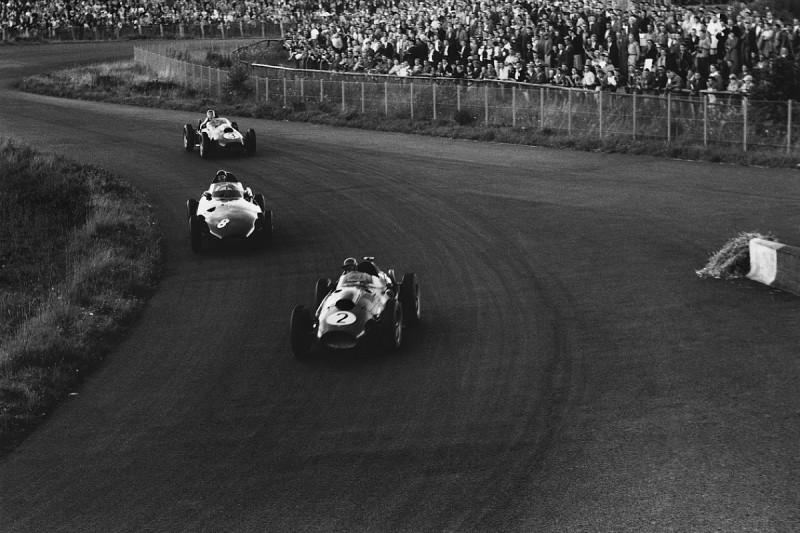 Stirling did his standing lap in 9m26.6s and his third in 9m09.2s, which beat Juan Manuel Fangio's 1957 record and was very quick indeed, even allowing for the improvements which had been made to the circuit since then. Half-way round the next lap, however, his magneto packed up, leaving Hawthorn and Peter Collins in the Ferraris 32s ahead of me at the end of lap four.

With a lighter fuel load, the Vanwall was beginning to handle better, so I speeded up. According to the Ferrari lap chart I took 10s off Mike and Peter on lap five; 5.1s on lap six; 5.3s on lap seven and 6.9s on lap eight.

By now they, too, had speeded up as they could see me catching them, but over those laps I had pulled back an average of 6.8s per lap.

"Although the Vanwall did not like being thrown about, our cars were pretty evenly matched in handling, but the Ferraris had more power and were definitely faster on the straight" Tony Brooks

There were some uncanny similarities to the 1957 German GP, even down to the overtaking spots. In the first half of the 1957 race (22 laps as opposed to 15 in 1958) Fangio went away from Mike and Peter at the rate of 4.6s per lap in his 250F Maserati, which started with half a tank of fuel. On lap 12 he stopped for more and new rear tyres as planned, letting Hawthorn and Collins into a 45s lead.

Over the next eight and a half laps he proceeded to catch them at the rate of 5.5s per lap and won what many regard as the greatest GP of all time.

Only with the aid of these rather boring figures from the archives can I explain exactly why the 1958 German GP was the race of my life, something which had only been a gut feeling until I came across them recently.

Mike and Peter were two of the very best and I feel that I performed well against them, even by Fangio's standards, which was very satisfying on the great Nurburgring, although I was fortunate that the Master had retired from racing. 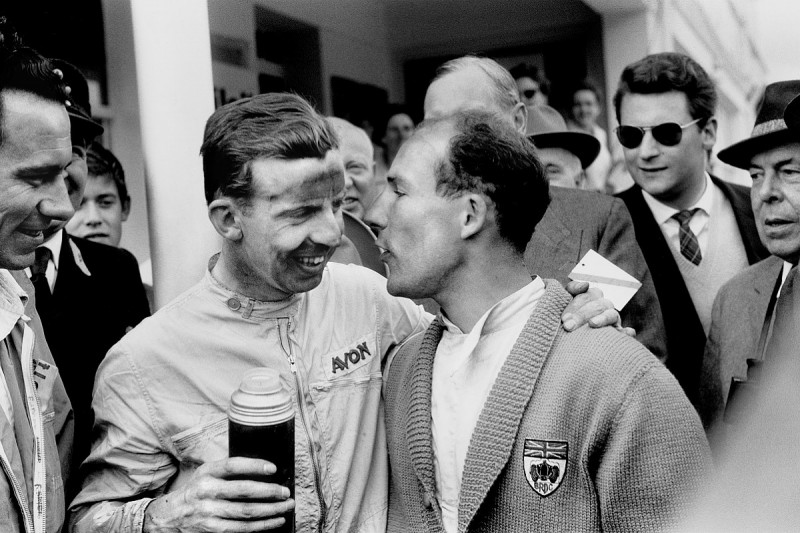 As we passed the pits at the end of lap nine we were almost note to tail in the order Collins, Hawthorn, Brooks. I was able to use the Vanwall's superior disc brakes to go past Mike into the North Turn behind the pits, so I was now the meat in a Ferrari sandwich.

Although the Vanwall did not like being thrown about, our cars were pretty evenly matched in handling, but the Ferraris had more power and were definitely faster on the straight, where Mike repassed me. This time, however, I outbraked him after the pits, going into the South Turn and then got by Peter going into the North Turn.

I was now lapping in the 9m10s bracket as the Vanwall's handling had steadily improved with the reduction in the fuel load, so I was determined to drive flat out and put enough distance between myself and the Ferraris that neither would be able to pass me on the 3km straight.

It was on the 11th lap that Peter crashed fatally at Pflantzgarten and when, soon after, I reached the straight and looked in my mirrors there was no sign of him and Mike was a long way behind. I thought that Peter's Ferrari must have blown up and my reaction was one of great disappointment, as I was really into the swing of things and greatly enjoying our battle.

After that, the race was a bit of a damp squib, in contrast to Fangio's dramatic finish the year before, but it was good that ours was the first British car and driver combination to win the German GP.

It was not until after the prize-giving that I learned of Peter's accident and that he had died on the way to hospital. Only Peter knows for sure, but the probability is that he made a mistake in the heat of the moment. We were all very much on the limit and, tragically, Peter just slipped over it.

The fact that there was no room for error is another reason why it was so satisfying to do well at the 'Ring. That was GP racing at the time and it just isn't the same sport today, which is just as well, for the driver death rate in the 1950s represented a tragic waste of young lives.

From backmarkers to the podium in four races - what's McLaren’s real form?