McLaren's Lando Norris messaged Lewis Hamilton to apologise for his "stupid and careless" comments following Formula 1's Portuguese Grand Prix, as he revealed his motivation for publicly posting his apology

Norris wrote on Twitter on Tuesday that he had "been stupid and careless with some things I've said lately in media and interviews, and haven't shown the respect I should have to certain people", regarding comments he made after last weekend's race at Portimao, where Hamilton clinched a record-breaking 92nd F1 win.

The McLaren driver had earlier downplayed Hamilton's achievement saying "he's in a car which should win every race basically" and that he has little opposition.

Ahead of this weekend's Emilia Romagna GP at Imola, Norris explained that his Twitter apology was specifically about "the comments about Lewis, and him reaching his 92 wins".

He continued: "Which I have a lot of respect for and I just didn't choose the right words to put that into context.

"I apologised, but I also apologised to Lewis himself - I messaged him.

"I don't know if you knew at the time but I never mean to say something like that in a bad way, or put any bad light on him at all, and I respect everything he's done to achieve what he's done.

"It's incredible no matter what. It was just the way I put it was not the way I wanted to put it across. So, I said what I said, I apologised, and I've just got to move on."

When asked by Autosport if he had faced any pressure to clarify his comments, Norris said: "No, it was all done off my own back.

"But I woke up in the morning, I looked on social media and there was just a lot more bad comments than good about the things I said.

"Like I said, I never mean any of it to be put in that way or taken out of context in a bad way, especially against Lewis. 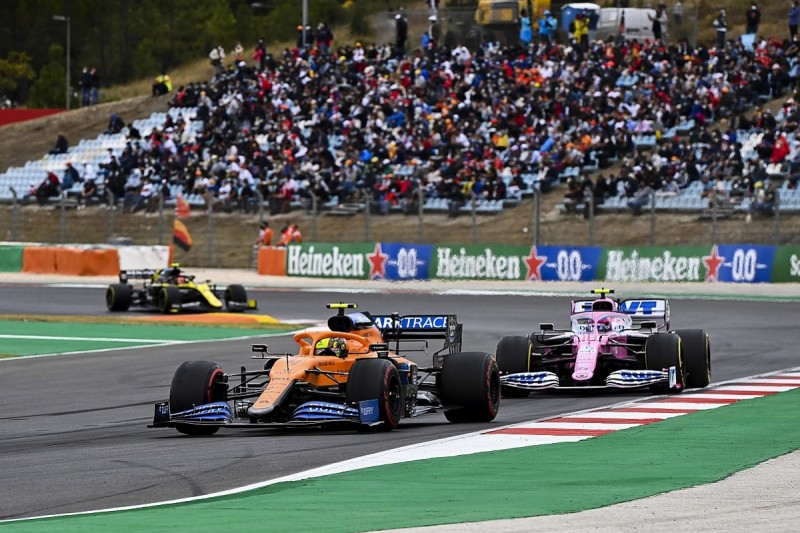 "I saw how it was going down, and I felt bad because it's not the person I am in any way - to put shame on someone or not have the respect for such a driver.

"I made the decision in the morning to put up the tweet and just issue my apology and messaged Lewis at the same time just to set things straight."

Norris said he "passed [the line of acceptability] twice with my own opinion" at Portimao, which included his in-race comments slamming Lance Stroll's driving in the collision between the pair last Sunday.

"It's always not easy," Norris said regarding being open and honest when giving public comments.

"I guess my first apology was more for the language I used more than anything.

"Not everything I said I apologised for, just more the specific wording of what I said.

"But it's not easy, everything can get taken out of context in some way and especially now in 2020 you have to be careful with what you think.

"And as much as I like voicing my own opinion, and that's what I did in a lot of ways, I maybe didn't pick the right wording for what I said.

"I probably will make a mistake at some point in the future and say the wrong thing again, but I never mean it and I'll try to do the right thing."