In his first appearance for Mercedes as Lewis Hamilton's stand-in, Williams regular Russell dominated the majority of the race at the Bahrain International Circuit, taking the lead at the start.

Russell built up a lead of almost three seconds over Mercedes team-mate Valtteri Bottas through the opening stint before pitting, and ran over five seconds clear after gaining more time though the pit cycle.

But when the safety car was called on lap 59, Mercedes tried to double-stack its cars in the pits, only for the team to be slow in fitting Russell's tyres.

The pit crew released Russell, but found it had accidentally fitted the tyres meant for Bottas to the British driver's car. As a result, Bottas had his existing hard tyres re-fitted before being released again.

Asked by Autosport how the tyre mix-up happened, Mercedes team principal Wolff revealed that a radio issue meant the call had not come through to Russell's side of the garage.

"What happened is that when we called the pit crews out, they get a call on the radios and bring the right tyres out," Wolff said.

"One side of the garage, George's side, didn't hear the pit call.

"We had a radio that didn't function, and then the wrong guys with the wrong tyres came out." 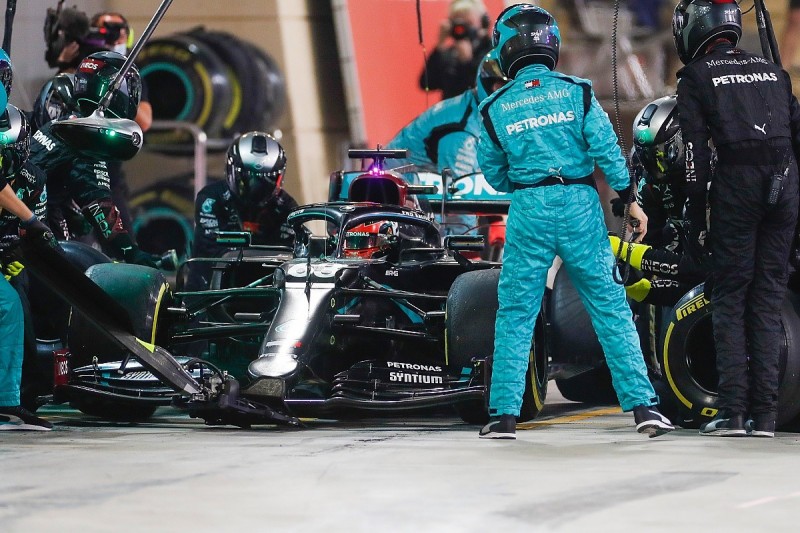 Russell was forced to pit on the next lap to change back onto his own tyres, but is under investigation for running on Bottas' compounds.

"We knew immediately when Valtteri didn't have his tyres, we knew that Valtteri's tyres were on George's car," Wolff said.

"We fitted Valtteri's old hard tyre that we just took off to the car again, and we knew we needed to pit George again."

Despite the issues, Russell was still in a position to win the race in Sakhir, fighting back from fifth on the restart with 19 laps to go to sit second before a puncture forced another pit stop.

Russell ultimately finished the race ninth, and admitted afterwards that the setbacks "really bloody hurt" after coming so close to a debut win for Mercedes.

"The slow puncture probably came from him having to run off the line so many times in order to overtake," said Wolff.

"As for the race win? I don't know. I think our planner said he would catch up to Sergio and maybe DRS would have helped us, but I'm not sure [if he would have won].

"Sergio drove a brilliant, brilliant race, and deserves the race win because we made too many mistakes, and were unlucky with the puncture."