The risk of a post-race protest from Ferrari prompted Mercedes to make modifications to its radical wheel rim design ahead of the United States Grand Prix, Autosport has learned

As Mercedes seeks answers to its tyre temperature struggles in the Austin race, it has emerged that the team made last-minute tweaks to a rear wheel rim concept that had been under the spotlight ahead of the weekend.

The unique design of the Mercedes rim - which features internal holes to help blow air - has been viewed as one of the factors boosting the German manufacturer's recent run of victories.

But it had been the subject of a rules clarification from Ferrari in the build-up to the US GP.

Ferrari had wanted to know why the use of such holes, which in theory help energise airflow, were allowed even though they apply a similar concept to a design of wheel hub that Red Bull was banned from using back in 2012.

The FIA looked closely at the Mercedes design and was satisfied that it was fully legal, and informed both outfits that it saw no need to intervene. 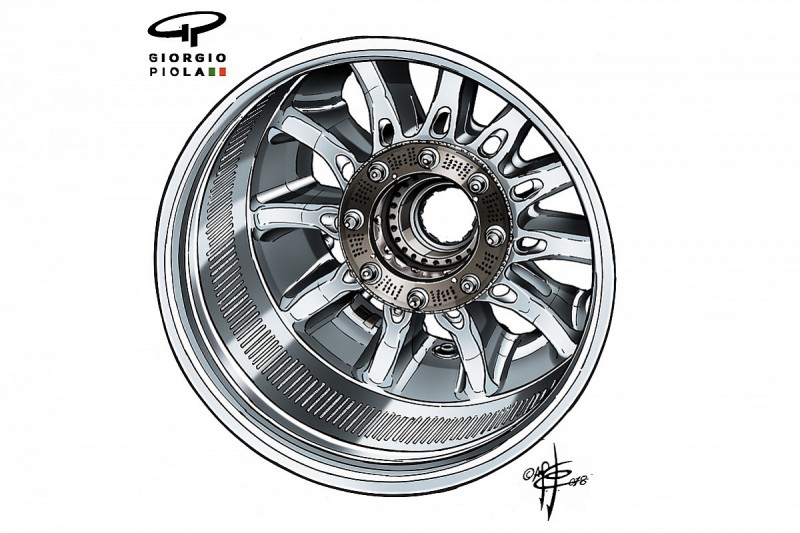 Sources have now revealed that Ferrari remained unhappy with the FIA's standpoint and it questioned the governing body's interpretation during discussions over the Austin weekend.

As a result, and aware that Ferrari had the option of taking the matter further by lodging a protest post-race, the FIA advised Mercedes that there remained questions about its design.

It is understood that the risk of a protest - even though there was no suggestion Ferrari actually threatened to do so - meant Mercedes decided its safest option would be to modify its wheel rims to ensure that the areas of contention were addressed for now.

Although the FIA's stance that the wheel rims are legal would have given the team confidence had a protest emerged, it is well known that the views of the governing body are only ever advisory and the final decision is for the race stewards.

Mercedes likely felt that it would be best to avoid the chance of any post-race trouble that could overshadow its possible title success.

It is unclear what impact the changes to the wheel rims had on Mercedes' performance in Austin, but Lewis Hamilton hinted after the race that there were some unexpected factors that had impacted its tyre usage.

"We were forced into a two-stop race for certain things we had that weren't ideal with the car," he said.

"We didn't know that was going to be the case when we got into the race. If we hadn't had the problem we've had, tyre usage wouldn't have been anywhere near as big an issue."

It is understood that the FIA remains happy with the original Mercedes wheel rim design, so it is likely the team will push for further clarification about the matter ahead of the Mexican Grand Prix.